I just fired off the wood kiln this last weekend.  It was a very good firing, I'm still digesting but so far I'm very pleased with it.  I've been working with this new slipware kinda thing with an ash glaze and it's been a struggle, but I think I've finally gotten the glaze just right.  I only had a couple of wasters in this kiln which is very good, considering that I've lost about 100+ pieces out of the last 2 firings.  I've been having a problem with my ash glazes blistering but this time around I slowed it way down from the time cone 7 was down.  With slips there is nothing to mature so there isn't really a need to slow it down or soak it.  Different story with the glazes.  I had a handful of pieces blister and I'm going to attempt to refire them, usually a waste with ash glazes but they're platters/bowls so I think it will be okay.  It was localized in the part of the kiln that got the hottest the fastest(the bottom backside) so I'll just have to watch that next time.

Here is the back stack: 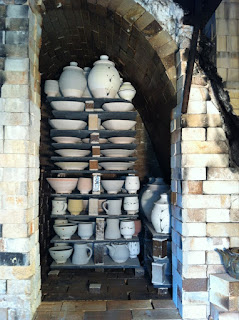 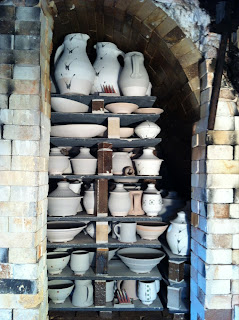 The front wall of my kiln has been doing a lot of moving and needs a rebuild.  I'm seriously contemplating building a new kiln this next year if it's financially viable and if I can do that I'm not going to waste time and materials rebuilding part of my kiln.  I bought a couple sheets of cement board and clamped them tight to the front of the kiln, it seemed to do the trick.  I usually have so many gaps it makes the temperature and atmosphere erratic, smooth and steady this time.  Not very pretty though.  I'm a believe that kilns should be aesthetically pleasing as well as functional.  They shouldn't look like crack whores. 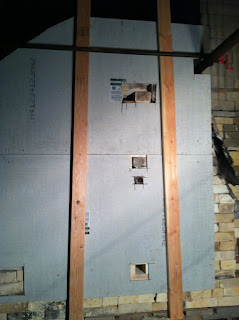 Here is the stack post-firing.  Not a great photo but you can see some good color in there. Yee-haw! 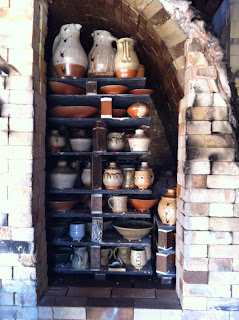 Here are a few pieces from this firing.  I'm super excited about these. 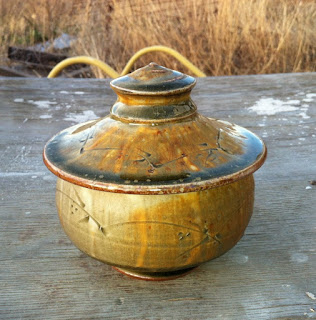 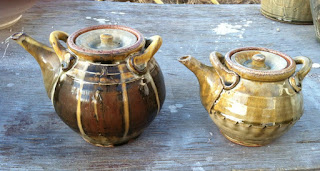 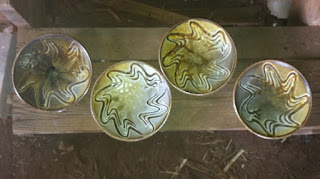 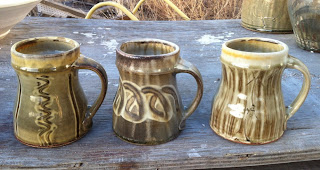 This is a piece from a previous firing, this will be at a show during NCECA called "Stoked in Texas".  A group show of Texan woodfiring potters curated by Gary Hatcher.  This is the piece they photographed for the catalog. 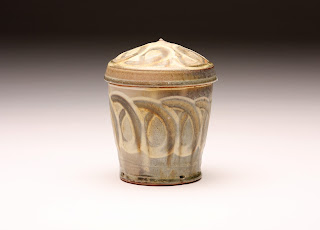 That's all I have for now...back to work!  Firing again next week.

It's about midnight here and I'm waiting a bit so I can turn up the electric kiln and go to bed.  The end to yet another 15 hour day. If you are a Deadliest Catch fan you might catch the title reference.  I was spoiled up at the school with the computer controlled kiln.  The studio is mostly finished and I've been working steady in there.  I've been pulling a lot of long days since Thanksgiving. My two biggest events of the year are coming up in about 5 weeks.  My MFA show goes up mid-February(can you believe that is already coming to an end?!!!) and the week after that I'm heading off to Baltimore for the ACC show.  After those I'm going to NCECA in March and then up to the ACC show in St. Paul in April.  This MAY be my last year for the Baltimore show, I've given this wholesale thing a shot but I've not been that happy with it.  The money has been good but I don't like the compromise.  I've burned a couple bridges this year with my biggest accounts so it may not be as profitable to me as it has been, but we will see.  I like to think that I'm sacrificing to hold up the flag for artistic integrity, or I could just be an uncompromising bastard.  I have to say though, it's easy to stand behind the flag of artistic integrity when you're pulling a teaching salary, I'll admit it.  If there is one thing that Elmer Taylor has impressed upon me (ad nauseum) it's that the University is a patron that affords me the opportunity to work as I please.  Well, anyways. Here's a few photos from the last couple weeks. 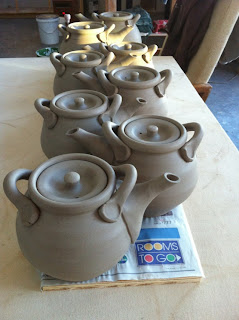 Large vase, I liked the texture on the ridges. 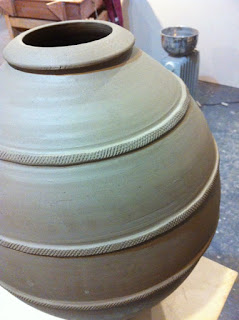 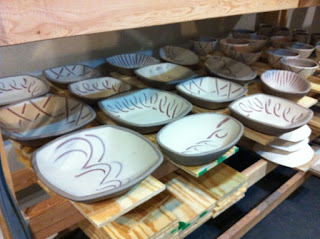 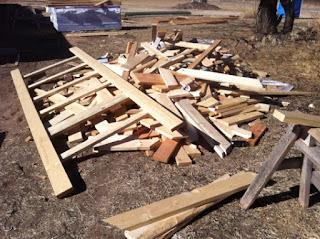 Large bowls, more slip work.  These are made with my batch of Ocmulgee brick clay.  Gnarly stuff. 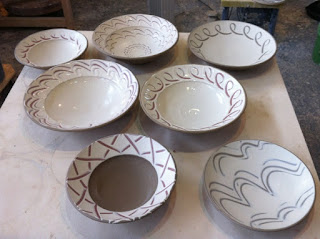 The pots are stacking up. 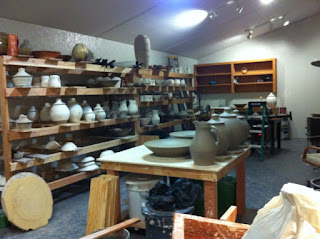 My goal was around 500 pots for the Dec-Feb cycle, I'm sitting somewhere around 300 at the moment.  The problem for me is working that far ahead.  Once I've produced enough work for a firing it's hard to keep working because the question for me is what do I make?  I'm not immediately firing and getting that feedback that I can take into the next cycle.  So instead of working non-stop and then firing back to back I'll try and get a firing out next in about a week and a half and that will give me 3 weeks to get a some last minute work done for the second firing.

Well, time to turn up the kiln and head to bed.