I had my trip to the oral surgeon yesterday morning, spent yesterday doped up, slept 12 hours last night and today I felt fantastic! I got up on the barn roof and started taking down the chimney and finished removing the firebox. 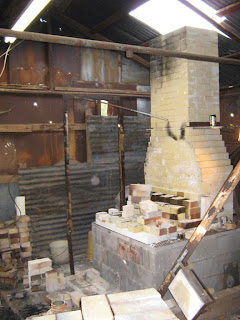 What's left of the old kiln. 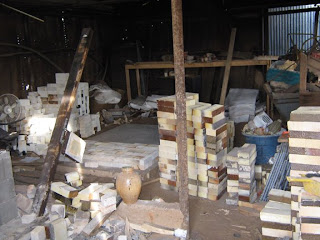 I've sorted the brick into certain piles that would make sense to no one else but me. I have a couple different grades of both hard and soft brick and many pieces that are cut so I have it all seperated so I know where to look while I'm building. 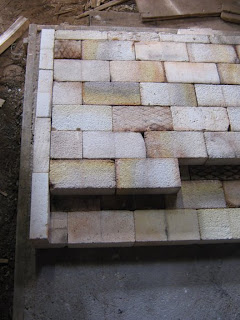 I've started building the new one before the old one was completely torn down because I'm running out of room to stack brick. Here is a nifty little tip I picked up in the Ruggles/Rankin articles in Studio Potter about building floors. Using bricks cut longways(soaps) on the perimeter over the first layer and then a third layer of hard brick without the soaps creates a floor with no gaps. The traditional method overlaps the bricks only on the ends and therefore leaves a gap all the way down, this method creates the closest you can come to an airtight floor. Very simple and straightforward yet not something I would've ever thought of on my own. 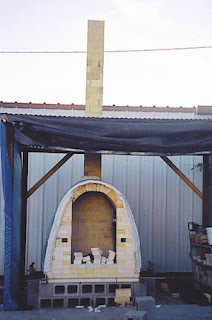 Here is my old salt kiln built in ealry spring 2004 and fired 30+ times in 2.5 years. The majority of the bricks in my wood kiln are salvaged from this guy. When I built this I paid $1.45 for straight empire(high duty) hardbricks, I found a deal on the arch bricks which were clippers(super duty) and I paid $1 each. All of the soft brick were seconds that I purchased from Larkin Furnace for $1 each. These were some good deals but when you consider there is a couple thousand brick+ in this kiln it adds up. I priced bricks about 4 months ago and empires were $3.55 and clippers were $4.65. The softbrick can be found for $2.50-4.00. Who can afford to buy new bricks nowadays? It's ridiculous, I'm so thankful for the folks that have let me salvage their kilns so I can build a new one. 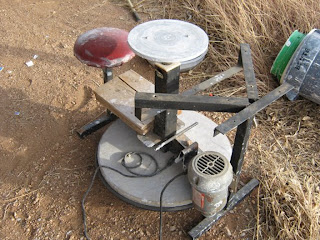 Here is a wheel I traded some pots for from a guy here in town. I gave some thought to building a bench and using it korean/japanese style but I don't really have the space for all that so now I'm thinking of stripping the bearings and wheelhead to build a treadle wheel, I've always wanted to have one but I really want to build my own. Eh, we'll see what happens, don't be on the lookout for that anytime soon.

That's all I have for now, so long.

Posted by brandon phillips at 4:26 PM

Really glad to hear you're feeling better. Awesome job there getting the kiln down and going again. Have you checked out Andrew's blog the past couple days? Nic Collin's is doing some kind of crazy wet firing. Looks really amazing.
http://potterboy.blogspot.com/

It is unfortunate that new bricks are priced so far beyond the means of most potters. Luckily there are quite a few used and second bricks out there. Glad to hear you have enough for your new kiln. Good luck.
Joe