I have quite a bit of area to cover in this post. I've been really busy and as is the case for most potter bloggers the blog is fairly low on my priority list. My etsy sale was fairly successful, maybe I'll do it again next year. Those pots went out earlier this week.

Here are our lawn mowers, Lee and Harvey. They've gotten quite large, they're both well over a hundred pounds and lets just say you don't want to get on the wrong side of those horns. You may wonder why Lee looks so filthy, well, he seems to really love pissing on his face. 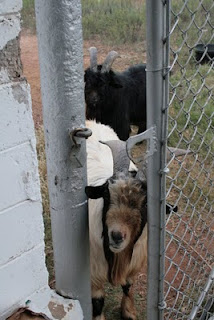 The last time I fired my wood kiln was in March, I had an extreme teaching overload in the spring and then house remodeling in May, and we don't fire it during the summer if it can be avoided. So I hadn't been out to the barn where the kiln is for a couple months. The barn is actually divided in two. The part with the kiln is completely enclosed, and although the doors don't have locks on them they are latched shut and are made of solid steel. The other part is open to the elements on one side and is where the goats had made their home. At some point in August someone went into our barn through the side door, for what reason I don't know, and left the door open. The goats in their rambunctious nature made there way in and proceeded to destroy everything in sight. The kiln itself is mostly intact, they broke about 10 of my kiln shelves and destroyed part of the front wall, part of the door and the bagwall now sits in the firebox. I discovered this horror in August and have left it as it is since then. I'm now at the point where I have to deal with it. The goats have been given a shack elsewhere on the property so that if someone makes their way into the barn again the goats won't have access. The cleaning and rebuilding will begin later this month. Here are a couple photos of the goats destruction, we'll leave it at that for now. 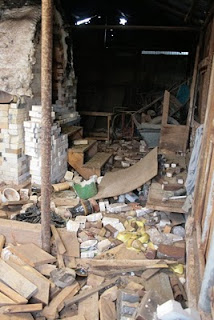 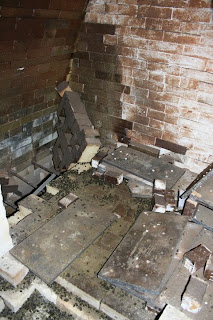 7 months of neglect on the wood pile and property as well. I put out a call on facebook for someone who has an interest in woodfiring to trade labor helping me clean this up for space in the kiln. So that will get taken care of soon. 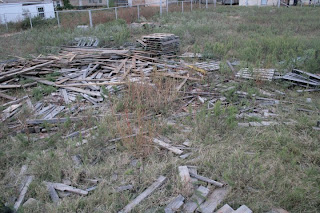 Here is the salt kiln at the university that I've been using since May. I've fired it I think 6 or 7 times now. It's held up really well, we need to go in and rebuild the area where the bagwall sits. It's threatening to pull a Kyle Carpenter there. The homemade castable in the arch has held up surprisingly well. It's in better shape than anything else in the kiln. 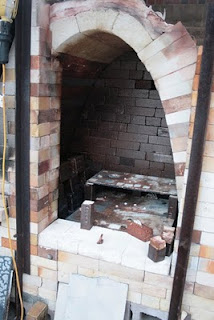 Here is a mug with my amber glaze. It forms these crystals when it gets really blasted with salt. 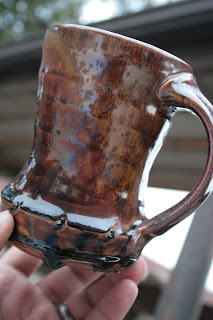 These teapots are the largest I've ever made. The two bigger are made from 4 pounds of clay, I'm not sure how much they hold. Large teapots are tricky because of the spout. You want it to work with the scale of the pot but at the same time just because the teapot is bigger doesn't meant that you want more liquid to come out at once. 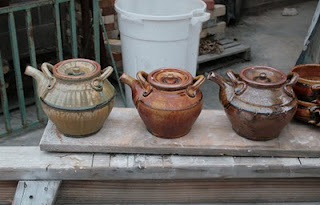 I was particularly pleased with this large jar. Take note of the ceramic sculpture sitting in the corner there, it was made by a faculty member long ago. I'm the third teacher besides the maker to leave it in its place. It's been sitting there for probably 20 years now. 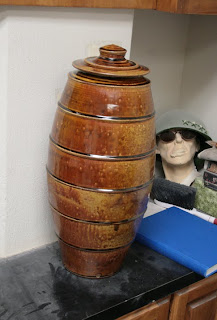 I've been having problems with large bowls and platters warping all to hell in the salt kiln. This particular one cracked in about 2 dozen places as well. They tend to curl up on the side nearest the firebox I'm guessing due to the dramatic heat. I've lost 9 of these now, a few will make it to the seconds table at the home sale but that's not good enough. 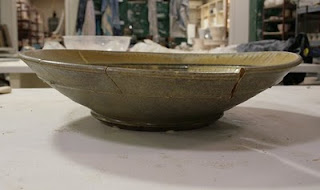 Here are some bowls I footed today. 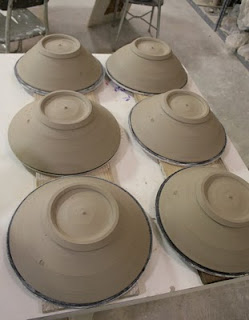 Some 3# and 5# lidded jars, the lids are in the background there. 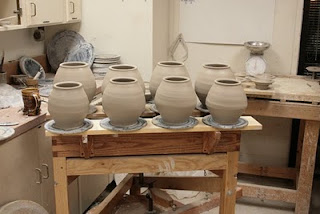 Now for some more content. I've gone back to slipping my pots since I'll be going back to the wood kiln this winter. I took a hiatus because I was getting frustrated with how derivative those pots were. The slipped work is where my primary interest lies and I've made the choice to dig in and work through my own misgivings about it. I've decided to decorate every last pot in an attempt to force myself to work through the derivative nature of what I'm doing now. I have no problem if people can tell where influence comes from-in fact I want that, there is nothing wrong with working in a similar style as someone else. But to blatantly copy work with no intent to grow from it, well, that's just sad. So in true pottery fashion it will probably take a few hundred or even a few thousand pots before they are truly recognizable as mine and not some ripoff. Some credit is due to my wife for forcing me to realize that I'm expecting far too much artistic growth for my short 29 years of age. 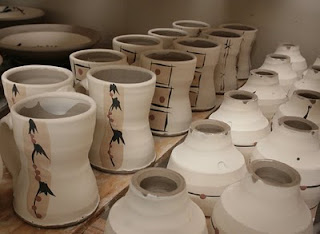 Just got my first original BP cup in the mail today.

Holy Sh*t, Brandon, it looks like a bomb dropped! I'm surprised you didn't end up eating goat stew!
I have a similar problem with warping bigger bowls/plates on the flame side in my wood kiln. Never had that happen in my small gas kiln. maddening...

truly saddened to read of the destruction in and around your kiln. I would come and lend you a hand if I was nearby

Holy crap dude that is insane! I think I'll just stick with drawing goats. Sarah's dad had some goats when she was a child. She remembers them peeing in their faces. Stupid animals.
Pots look great. That amber is a nice glaze. Good luck with the deco. I had a talk with Linda McFarling years ago about how hard it is to make slipped, lightly salted pots and decorate them without looking like Ruggles and Rankin or Michael Simon. Tile 6 and Black brushwork. I agree though that it's fine to work in the same style but it is hard as hell to come up with new marks. It was for me anyhow. I think Aaron Sober is doing a good job with that, and Kyle too has pushed past it.

Nice feet on those last pots.

The platters/bowls has to have something to do with the crossdraft nature of the kiln I think. It doesn't happen in our downdraft.

That's exactly it Ron. R&R, Michael Simon, Scott Roberts, and Linda Christianson are my favs. I can't remember where but I saw a bunch of real early R&R pots and they looked just like michael simon pots. it makes me feel a little better. Maybe I'm just fighting the long defeat to becoming another earthenware potter, eh?

Goats will do that, but your goats appear to be over achievers... wow!
Working through the misgivings seems to be paying off, the refinement of your surfaces in the last shot are sweet.

Ha! No I see you going more of the Raku route, seeing how you like fire and all.

raku? we're not friends anymore ron. how dare you speak such blasphemy.

Ha!! I knew that would get your goat. Ha. Goat. Okay I need to stop.

Wow,
I'm with Dan on this one. If that were me, goat stew would be on the menu. Shelves, and bricks are expensive, not to mention all the work to clean the mess up. Sorry about that.
And as far as your pots being derivative... all pots are to some extent. I think it's only healthy to embrace it. As long as you keep making pots, exploring new thoughts/ideas your pots will grow and become more....

ahhh your wife has words of wisdom!!! maturity takes time..cheers man awaiting my self purchased birthday pres from your etsy sale!! ;)

I'm with Dan, I would have eaten goat all summer long! It doesn't even look like the are doing their mowing job.

the brushwork on those mugs is sweet!