I'm nearing the end of this work cycle, I've been working pretty hard and have produced in 3 weeks what typically takes close to 2 months. I'm going to have to start the next cycle before I fire this work which is going to be very difficult. My body seems to cycle with the work cycles, it's now prepared to ready the kiln and chop firewood but that won't be happening yet and I can foresee some protest on my bodies behalf. The human body is an amazing thing.

I'll be ordering some new kiln shelves(knock on wood) later this week so I'm hoping to get a firing out at the end of this month. I will spend the majority of the Thanksgiving break readying the kiln. So for now more shots of greenware will have to suffice.

I make a lot of mugs as most potters do. I weigh out all my clay but don't use any kind of measuring gauge except on pots that stack(plates, soup bowls, etc.) Something interesting that happens a lot is that the a lot of the time the pots all end up the same anyways. It makes sense, if you start with the same weight and are doing a certain shape the clay will only go so far, theoretically the same every time. Since I'm not strict about reproducing shapes there are many small variations. 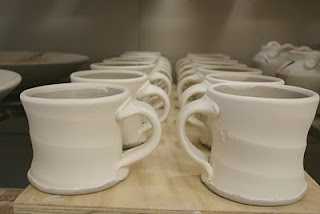 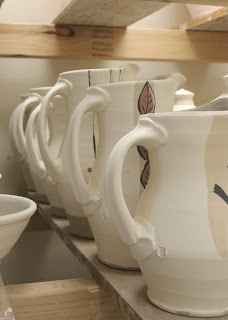 Lidded jars with a couple of leaf patterns. These patterns seem to border on kitsch, they have a naive quality to them. I think the fired quality of the pattern will be much stronger and more in keeping with what I am after, I hope anyways. 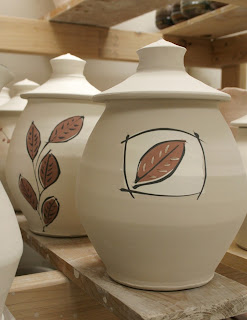 Tall jug. I did several pots with this pattern that isn't really anything. I suppose it could be some sort of flora, but what? It's probably a subconscious interpretation of weeds from my backyard. 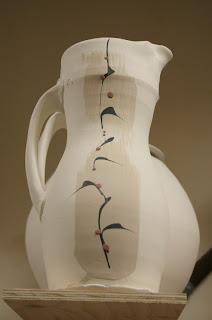 I can only make 12 plates at a time because that's all the bats I have of that size. Someday I'll make some more. 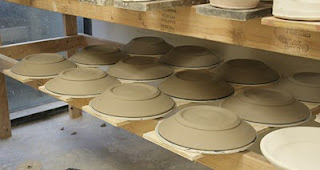 Plate foot detail. I usually leave a little bump of clay(some call it a nipple) in the middle of my footrings. Many historical pots, particularly from the asian culture have these. I've heard a variety of reasons for it so I'm not entirely sure of it's exact origin but it's one of those things that I incorporate as a sort of tip of the hat to those past cultures that have influenced my work. I can't leave them on the bottoms of plates because if it sags in the firing the nipple can actually extend beyond the footring if the feet are wadded. 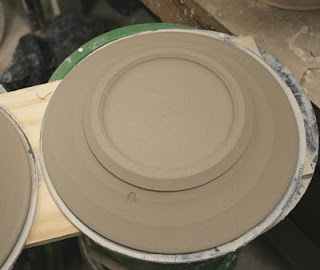 Here is an example of the nipple. Kline likes the anti-nipple, or maybe we should just call it an innie. 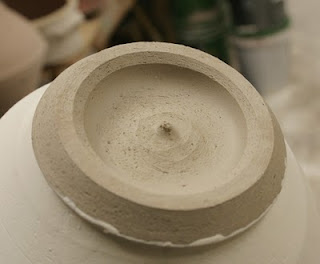 My ceramics 2 students are working on 18" pieces so I made a couple of demos. This was a sectional piece. 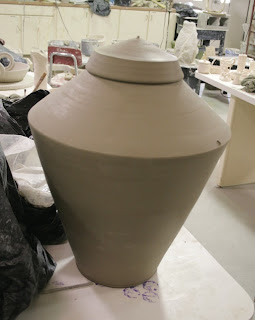 Here is the coil & throw demo piece for that class. 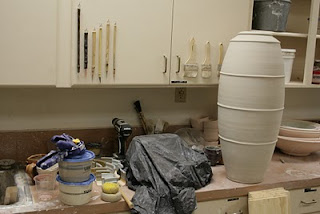 This is the work of one of my advanced students, I think he's on to something here. I have a couple of students who make work like mine which is okay for now but they'll have to grow out of it. I really enjoy it when students strike out on their own right away, this guy is a good example of that. His work is typical of 3rd semester quality but the concepts are strong and it will be interesting to see where it goes. 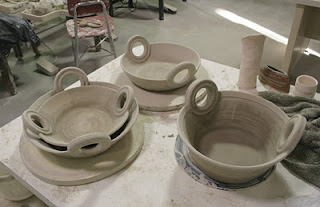 Cheers!
Posted by brandon phillips at 7:22 AM

You have been busy! I don't use a gauge for mugs either, I think my customers enjoy the subtle differences.

why no deco on the mugs?

Re the nipple: David Leach called it a pip, the notion being that it's a seed that the whole pot seemingly grows out of. I've made more than one pot that turned into a lazy susan because of that pip.

I appreciate you posting your students' work - always good to see new ideas and new abilities bursting through.

solution....wad the nipple/pip too-I make it a feature on platters and put my stamp there