september and october have been a whirlwind of busyness for me. the construction crew that i work for has been building two houses side by side so we've been working long and hard since mid-september. this is one of two boards of bowls that i made a couple weeks ago. here is one of my favorite photos from the warren mackenzie workshop. it was a wonderful experience, but it was painfully obvious at times that he is not as physically able as he once was. he has silicosis which meant that he was coughing up pieces of lung quite often. he throws his large platters nowadays on an electric wheel in his studio, but was convinced by a man at the workshop to make one, after trying to get out of it and trying to change the subject he finally agreed. he had a very tough time working that huge ball of clay. it made me mad at the guy for pushing him when it was obvious to everyone else that he didn't want to do it. when he showed up in the morning he was quite haggard and sickly looking but as soon as he touched the clay it was like a whole new person. there were endless stories and laughter, i'm so glad i was able to experience this. 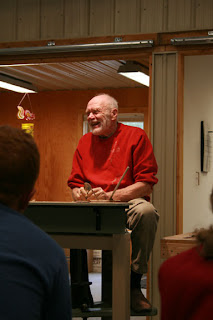 this past weekend was the texas clay festival in gruene, texas(near austin). there is about 50 or so clay artists and many demos and events. i've been going for years and now i go just to see a few potters. my favorite though is Patrick Veerkamp from georgetown, texas. in my opinion he is one of the best potters working in functional salt glazed ware, and one of the best potters period. philbeck-if you're reading this you should google him, i think you'd like his work. the sad thing is that he doesn't produce a whole lot of work because the majority of his time goes into teaching, well i guess thats not sad because i'm sure he's a great teacher, but sad because there aren't more veerkamp pots around. here is a plate i bought from him, sorry about the poor photo quality, it doesn't even come close to doing it justice. 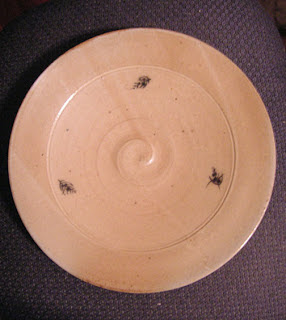 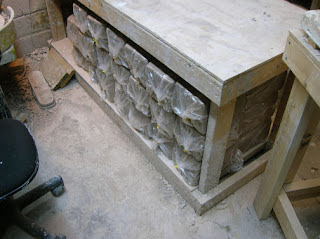 in my free time i enjoy doing a little woodworking. this is one of two night stands for some friends of ours. its a wedding gift and i'm sending them a picture to prove that i am working on them since they're six months overdue. and yes, jaime, i am going to put in a bottom shelf. 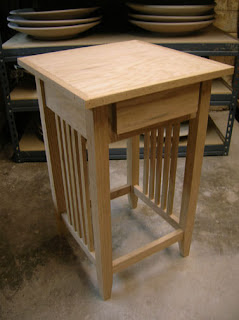 kilns almost done. i was going to finish it and fire this month, but couldn't because of the aforementioned busyness. same with the website. soon i hope.

oh yeah, the movie "once" is awsome, even more awsome is the soundtrack. see it.