The last couple weeks have been a whirlwind but I have a few photos here to share what's been going on.  I fired off 2 kiln loads in the wood kiln and was an exhibitor at the Texas Clay Festival which was hands down the best show I've ever done in Texas.

Here are a few photos of prepping firewood.  Notice the huge pile of cutoffs here...I wish I could find a use for all this.  The chunks are too big to fit through the stoke holes but they're also too small to be worth my time to chop up. 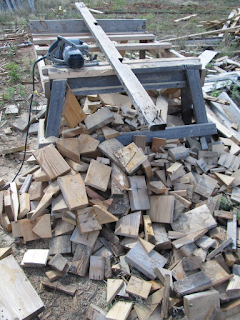 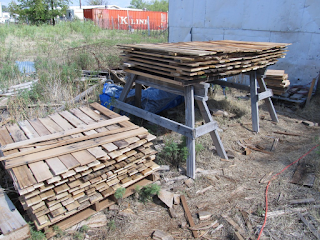 This where the pallet stripping magic happens.  The piles on the left and left-middle are slats that are too wide to fit through the stoke holes, I'll have to figure out a way to use them because I have a LOT of them. 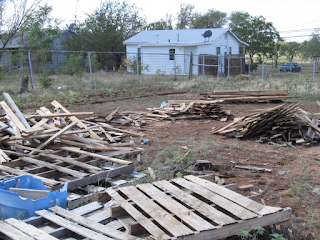 I bought a new pyrometer a couple months ago to replace my last one which had a battery leak and fried the innards.  This is basically a ripoff of the Fluke pyrometer at much less cost.  I paid about $70 for this guy.  The fluke runs about $200.  This one has dual ports so you can run 2 thermocouples if you need to.  It also has a zillion other options.  One of the coolest things is that it comes with a soft ware package that you load onto your computer and then plug the pyrometer in via a usb port and it allows you to graph your firings based on temp.  I haven't done it yet but that seems pretty cool, possibly useful.  My previous pyrometer was from Axner, it worked just fine except that you had to switch to C after 2000F.  Weird.  But, if you follow me on facebook you may already know that Axner/Laguna is on my shit list and I won't be doing business with them anymore. 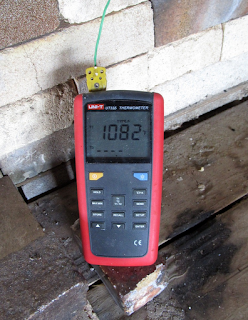 Here is a shot of firing XI before unloading.  It was a VERY good firing. 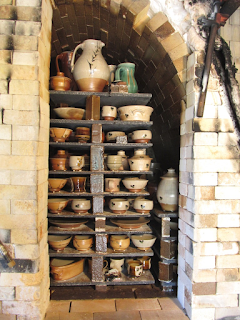 I don't have great shots of the work but I'm doing some portfolio shots later this week so I'll get some of those up. 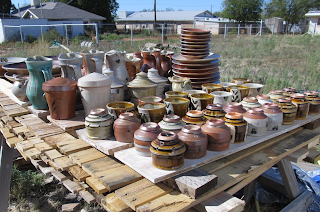 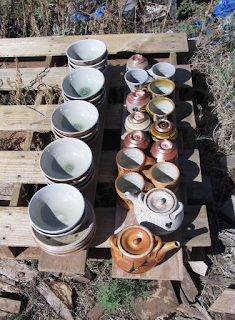 Platters/bowls from XI.  Check out that slab dish in the back, that piece was killer.  It's gone into the "permanent collection." 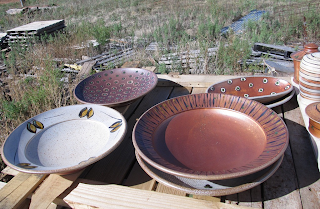 I have a full bucket of this copper green glaze that I mixed up when I was in college, it's a recipe from Randy Johnston but at some point in time I lost the recipe.  I use it every once in awhile.  I'd never fired it in this kiln so I glazed a couple pots with it to see how it did.  Pretty nice I think.  I prefer it over a dark body because it darkens the glaze a bit.  This is nice but too bright for my tastes.  And I think it has a good amount of barium in it, not really my thing. 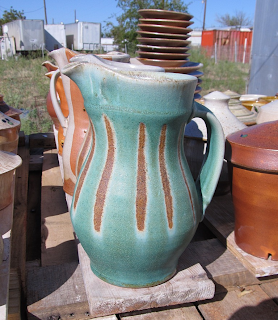 Firing XII, this firing was every bit as good as XI.  I had a few experiments in here, most of which turned out well.  I have a new nuka glaze that I'm really excited about but discovered it only does its magic in certain parts of the kiln.  A good chunk of this kiln was for a wholesale order and most of the rest came out and went right into bins for the Texas Clay Festival. 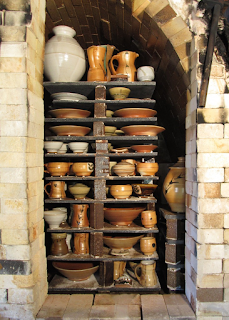 This was my first year to get into the Texas Clay Festival and it was phenomenal.  The great thing about clay shows like this is that they draw a very specific crowd.  I have never had so many people in and out of my booth.  I was there alone this weekend and was busy the whole time.  I got there over an hour early on saturday so I could walk around and look at the rest of the work but there were already people in my booth and I was selling before the show even opened.  So I never really got around, if I did get a break it was to run and get some water or to the bathroom.  I also spotted the elusive Keith Kreeger and was able to corral him for a moment to snap a photo to prove that he is alive and working in Austin. 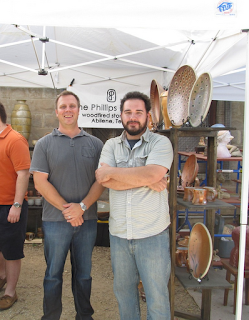 Cheers!
Posted by brandon phillips at 8:46 AM 5 comments:

I'm super busy this next week but thought I'd drop a quick note for my readers.

I'm prepping firewood today and will finish loading for firing XII tonight.  I'll start it up Monday after my afternoon class and fire into the night.

Next weekend, October 22 & 23, is the Texas Clay Festival.  I'll be exhibiting as well as demonstrating slipping and decorating leatherhard pots on Saturday afternoon. So if you're in the region come on down and check it out, the clay fest is always a good time.

I fired off the wood kiln today, it was a nice day and seemed to be a good firing.  The cones were even throughout which tends to be a bad omen but I have a good feeling about this one, we'll see in a couple days!  I left my camera at home...didn't really have any good shots anyways.  Maybe I'll get them up tomorrow.

I used pallet slats for all the stokes above the grates(1600F - cone 9/10)...450 slats to be exact, I counted for curiosities sake.  Approximately +/- 12 slats to a pallet that is about 38 pallets.  I found there to be two positive aspects to this:
1) The kiln fired remarkably even, my guess is because of the consistent size of the wood (pallet slats vs. chopped wood.)  I'm used to having to adjust the dampers or wood size to even it out, not this time!
2) The pallet wood was primarily oak and there wasn't any dense smoke like there is with pine. No fire department this time!

The negative aspects:
1) Oak has a shorter, harsher flame than pine.  Pine has a slow lazy flame that penetrates all parts of the kiln, this means I get good surface on all sides of the pots.  Not sure how the oak will do.
2) Nails, lots of them.  I just bend them over but they still get caught on everything.
3) I can get about 10 pallets in the back of my truck, my source isn't too far but that's still several trips.
4) Stripping pallets is a bitch.  A lateral move from chopping I guess.  Most slats have nails that have to bent over and the slats still have to be cut to length.

Overall I think for now I prefer stripping the pallets.  I'll let the pots be the final judgement.

It's a bit foolish to have a wood fired kiln in a region where there's not much wood except mesquite.

It's my misery that I HAVE to wood fire.  So it is.

This weekend I cleaned out the kiln, ground and washed the shelves and posts and loaded that sucker up.  The tentative plan is to fire on Friday.  We'll see how that goes, I've got some firewood issues to work out.  On Saturday I received a call from one of my wholesale accounts with a reorder they need by the end of the month.  My dilemma then(with half the kiln already loaded) was to hold off and make the remainder of pots needed for their order and then fire OR go ahead and fire now then turn around and do another one.  The order will take up about 1/3 of the kiln and I've got a big show coming up at the end of the month for which I'm out of lots of things so I elected to do two firings.  I do have extra pots, though I may have to find a few people to put some pots in the second firing.  This means that after these two I probably won't be firing again until the winter break.

The cleaned out kiln...waiting on pots. 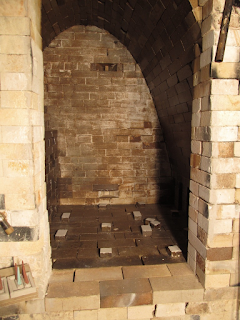 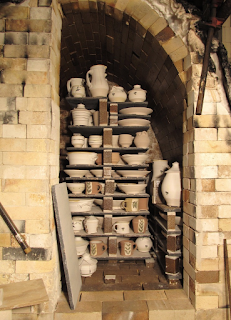 The front stack.  I had a lot of shorter pots this go around, a record 36 shelves in this firing...that's probably going to amount to a bit of a longer firing. 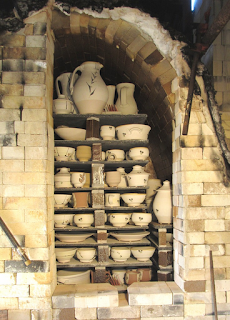 A few weeks ago I was searching around on the web for an alternative way to strip pallets(my wood sources have steadily been drying up.)  I currently use a reciprocating saw, which works but is tiresome.  I found a nifty modified nailgun that just shoots the nails through the slat...awesome!  But $400.  I though about modifying a used one but I'd still be ponying up a couple hundred dollars and I don't know if my compressor could keep up with that.  Then I found this brilliant chap in the UK who came up with this giant prybar.  Genius, work smarter, not harder.  Since this would be too cost prohibitive to import from the UK(I'd totally pay for this) I made my own from scrap lying around the school.  I'll have to make another because the 1/4" steel won't last, it likes to bend.  The oak pallets are a bit harder to seperate than pine but I think this will work.  It does get problematic when you only have a couple slats left but...I'll figure something out. 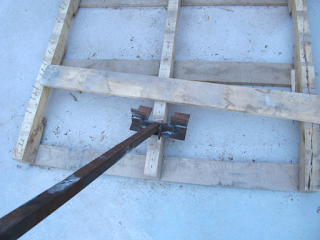 While loading the kiln I found this gal on one of the door bricks I picked up.  Gah! 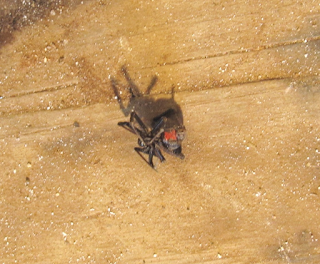