the majority of my weekend was spent doing pottery related things. i made plenty of pots, mixed up some slip and glaze and picked up a load of firewood. 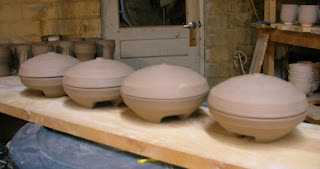 i market these as butter dishes, slightly untraditional. i discovered that they don't sit in the fridge too well if you have wire shelves, i'll have to make some flat-bottomed ones. 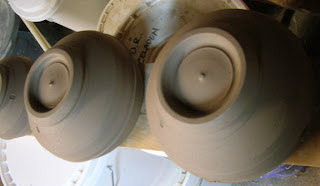 foot detail of some casseroles. 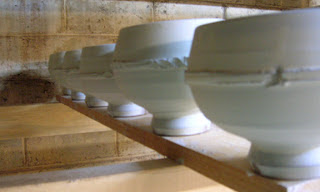 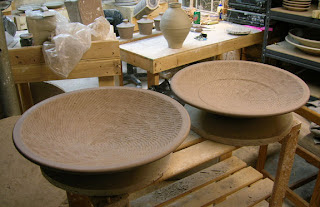 a couple of large bowls/platters. they'll be around 18" when fired.

freshly slipped tankards. these are pretty big, i made them to hold a 20oz drink with ice, or 2-12 oz bottles of whatever you're having after an extra hard day. 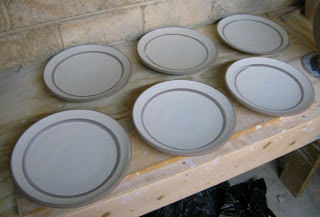 looking at all of ron philbeck and douglas fitch's earthenware pots made me wanna run my fingers through some wet slip, so i did.
the yunomi show at akar is awesome, check it out!
Posted by brandon phillips at 10:11 PM 3 comments:

a trip down memory lane

i was going through an old thumb drive and i found some old pictures that i thought i would share. 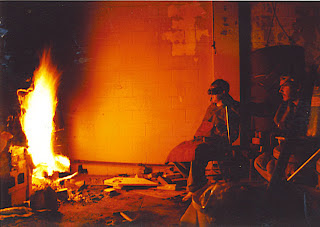 fall 2001.
this is the first wood kiln i ever built/fired. it was a modified olson fastfire and a piece of crap. that is myself on the right and good good friend and potter doug fudge on the left. this picture was staged, it was actually too hot to just sit where we were so we had to rush in to take the photo and try to look casual-with welding gear on. 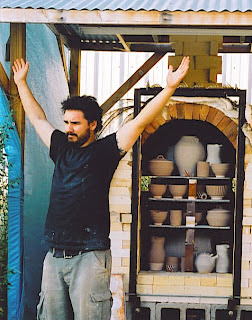 summer 2005
this is my old salt kiln at my previous studio. i was in this studio when all the energy prices started skyrocketing. when i moved in it cost about $70 to fire this kiln, when i left 3 and a half years later it was close to $250. this is why i now fire with wood. 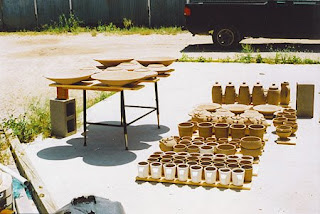 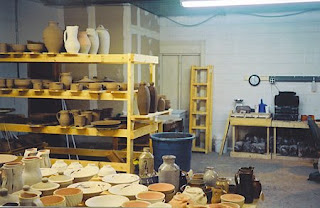 winter 2004
this was my previous studio, the only other personal studio that i've had since college. the studio space was close to 1000 sq. ft. the building in all was 1500 sq ft. with double that in outdoor space behind the building. i lived and worked in this building all for $380/month. the landlord was an old fellow who had not raised the rent since the early eighties. the deal was if anything went wrong with the building you had to take care of it yourself. he passed away after about three years and his greedy son took over and and was going to nearly triple the rent when my lease was up. i decided to buy a house and some land and hightailed it outta there.

winter 2004
i worked throwing production dinnerware right towards the end of college, i hated it but it was a great learning tool. 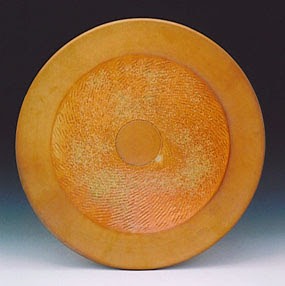 rimmed bowl, 18", 2005. i used to use this indigenous texas clay called blackjack clay. it was a great clay but it was smooth as porcelain and hard to get pieces with height. i like me a little grit. if i ever go back to mixing my own clay i will probably use this as a base, great stuff. 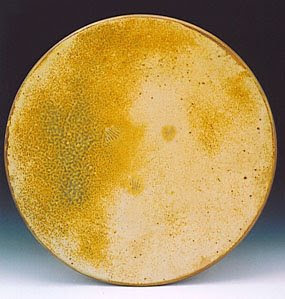 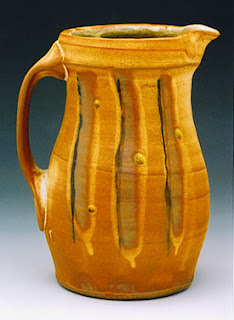 this piece is from my very first firing of my first personal kiln, march 2005. 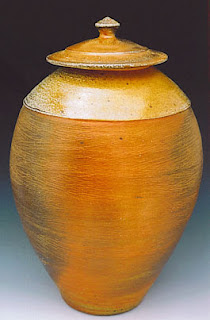 lidded jar, 19" tall.
this piece was from my last semester of college(2003). i belive it to be one of the best pots i have ever made. the kiln blessed this one for sure. i never sold it and keep it in the middle of our dining room table when not in use. sometimes i set other pieces next to it to see if they measure up. six years and i still can't stop admiring the surface.

i just read the previous post and it sounded a bit too chipper for that particular unloading.

sunday was a pretty awful day. i think that every potter can appreciate the feeling of losing pots in a kiln. but with wood firing....i don't know, it just seems to sting so much deeper. the hours and hours of labor that go into a single firing, its not just flipping a switch or turning a gas valve.
unloading that kiln was a downer. i just can't adequately explain the feeling, working so hard to bring these pieces into existence...i had a bit of a temper tantrum while unloading. the first couple of bad pieces emerged and i just scowled but after that i couldn't contain it and began throwing them across the barn and turning the air blue. all i needed to see was a crack or a flake of slip and that baby was gone.

of course i knew what i was getting myself into, trying to make a living this way is not for the faint of heart. and i should be greatful that i've had three firings that have all reached temperature and some great pots out of all of them. i kept myself busy today to clear my mind and went out late this afternoon to really have a good look at what came out of the kiln. i was so pleased to see today what i didn't see yesterday. i was so blinded with frustration that i couldn't appreciate the good things that happened to even the bad pots. i tried some new things and fired the kiln in a slightly different way and what happened was fantastic! i spent a good amount of time looking through shards trying to remember where those pots were in the kiln so i can try to recreate some of the magic. its amazing how energized i feel now, ready to get back in the studio and get some more pots out. every firing is a learning experience, and i need to remember that.

but please kiln gods, not the teapots anymore, okay?
Posted by brandon phillips at 9:23 PM 1 comment:

the good, the bad, and the ugly.

this was probably the best firing yet, the surfaces were amazing, but......i lost about a third to cracking and a bad slip fit, but even those looked good! you can see the slip peeling off the vase in this first picture, the teapot in the second has a nice big crack on the right side. most of these pots are from a new batch of clay, and i think that has to be part of the problem, the unglazed portions even looked different. something was definitely not right with this clay, but i can't really troubleshoot it because its bought, not mixed. fortunately i had some tests of a new body in this kiln, and i think i'll make the switch soon. i had a lot of standard work, mugs, bowls, etc. in this kiln that turned out great. heres a few shots, if i get time later i'll take some better ones. 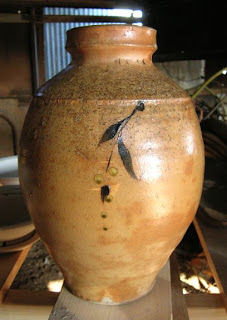 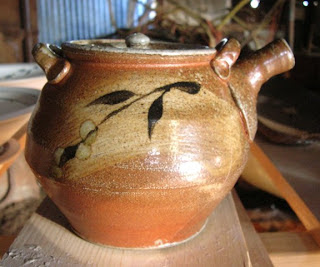 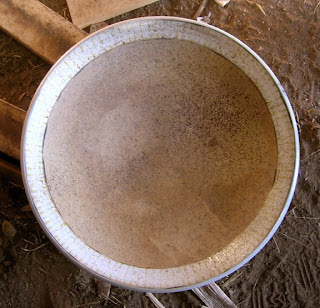 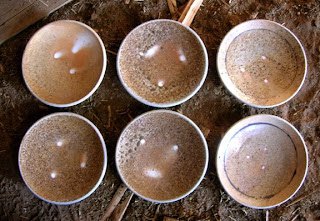 dessert plates, about 8 inches. sometimes when the ash and salt mix together there is this interesting surface that looks like someone blew some dark snot onto it, i'm not sure how i feel about it. 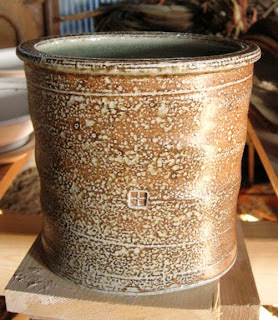 this was fired on the bagwall. 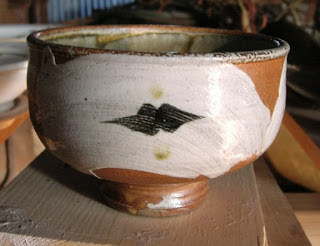 this was fired on the bagwall as well. 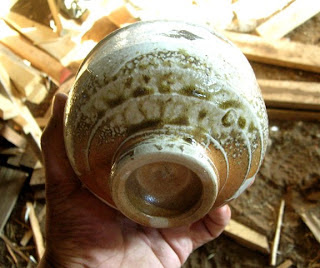 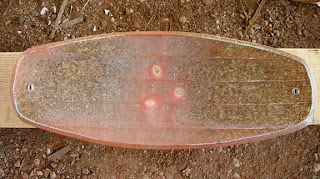 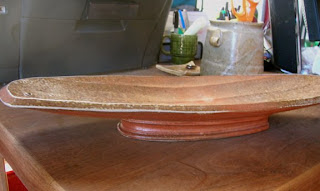 pedestal foot, its thrown and then pushed into an oval. i'm glad one of these finally came out!

i just finished firing number three. it fired even throughout, so lets just hope it looks good. i tried a lot of new stuff in this one, so we'll see. we're spending the easter weekend with my folks in dallas so i'll unload after we return.
Posted by brandon phillips at 11:08 PM 2 comments: