I just fired off XVIII yesterday.  This is actually my 30th wood firing here.  This is my second wood kiln, a much larger version of my first.  I'm going to have an etsy sale the first week in November to commemorate the 30th firing, 30 cups, $5 shipping.  So stay tuned for that.
Here is the loaded kiln, I spent a bit of time fixing up these walls, there were a lot of gaps. 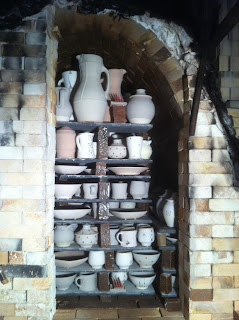 And you can see those gaps open right back up. The kiln has moved a bit over the last 18 firings and things don't fit as well as they used to.  So it's time to do some maintenance. The arch has spread about 1.5" so I need to try and get the arch back in place and then I am going to rebuild the front wall and door as well and put some steel on it.  I am also going to rebuild the stack, the corbel under the dampers needs some attention and the whole stack needs steel.  So that will be a fun task over the next couple of months.  I don't plan on firing again until the end of December so I have plenty of time. 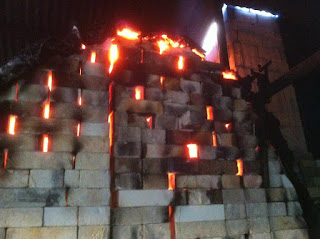 ﻿
﻿
Here are a few photos of some recent works in progress as I head into Firing XVIII.  This is the first firing in a over a year and a half that won't have a single piece for a wholesale order.  It's nice because it means that I have plenty of room for new ideas and experimentation as well as less pressure on the results.  The downside is that the re-orders are not coming in.  But more on that later. The firing is coming up this weekend and I believe I have enough work to fill the kiln.  I ran out of steam this last week as I discovered that I have a probable case of west nile fever.  Not the debilitating-could-possibly-die-version, but rather the mild-flu-like-symptoms-version.  Nevertheless it wears me out quickly every day.  The doc says it should last anywhere from 1-3 weeks.  I'm hoping closer to 1 week as I have this firing coming up and I know there is not a chance in hell I'll make it through with the energy level I have now.  Enough of that.

I haven't made a teapot in about 8 months and I think I might have one left. 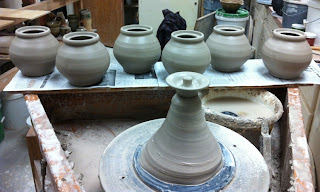 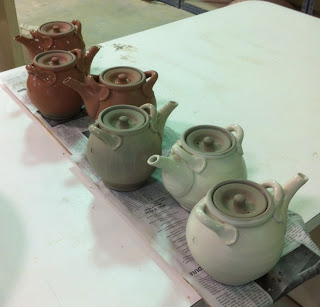 I'm all about the slab dishes these days.  They've been easy to move the last couple years...now that I've put that out there I probably won't sell another one. Every single one of these will get a glaze on top.  I'm not phasing out the brushwork but am pursuing other avenues of slip work in addition to it. 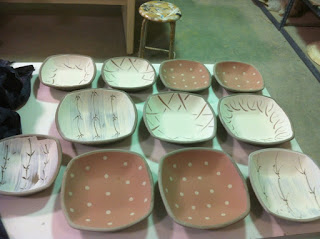 Here's a tall jug with tip of the hat to Jim Malone. 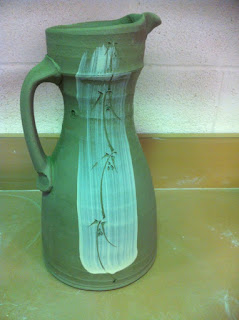 I'm HOPING to be moving into the new studio this fall.  If/when I do make that move a good portion of my work is going to be raw glazed and single fired.  I've procured a small electric kiln for some pots that are difficult to raw glaze, and I have two glazes that just won't take to it.  So I've raw glazed about 40 pots for this firing.  The irony being that I bisque fired them, I'm not comfortable transporting the greenware to the kiln.  I just want to make sure the glazes fit this time around, the next time I'll deal with the different firing cycle.  These are some leatherhard cups that have been slipped and glazed. 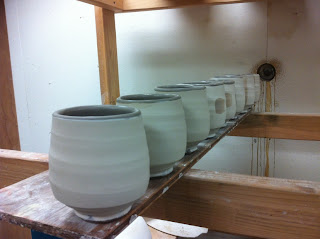 This summer my dog Kaylee got herself knocked up, kids these days!  She had seven beautiful little pups.  This was a couple weeks ago after I had just moved them outside.  The first two went to their new home today.  While it has been fun watching the cycle of life I've already made the long overdue appointment to have her fixed, not gonna happen again.  Too many dogs in this town already. 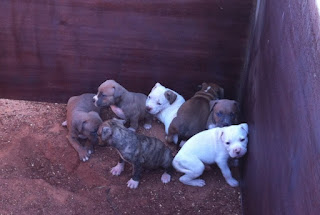 Well lets see, what is upcoming...
-I was invited to participate in the 3 cups show at the Durango Arts Center in Colorado.  I've already sold those so tough luck there.

-I have a show with Kenyon Hansen up at Schaller Gallery right now, head over there and check it out!  Still plenty of good pots.
-The Texas Clay Festival is just a week and a half away, this is my favorite show to do.  Good customers, good potters, good fun.
-I'm participating in Akar's 30x5 show this November, the theme this year is dessert plates.  I was also invited to participate in the annual yunomi invitational which I believe is in March(?).
-I'm on the fence about a home sale this year, if I decide to go ahead with that it will be after Thanksgiving.  I'd like to have the new studio done by then, it would be a good opportunity to show it off.
I'd really like to get myself back on etsy but I just haven't had the time.  Perhaps around the home sale? Eh?  We will see.
Well, I think that is all for now.
Cheers!

Hello everyone!  I am part of a two person show at Schaller Gallery with Kenyon Hansen.  I've sent some nice work so head on over there and check it out!  If you're wanting a BP pot this is the place to go.  I'm hoping to have an etsy sale in November, we'll see if I can get it done! 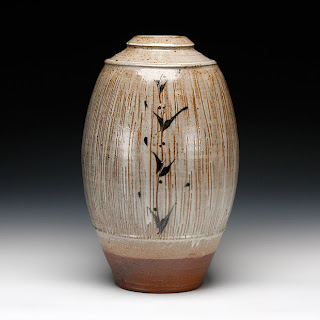