A boy and his dog

Saybra and I had our Christmas a couple nights ago, before we hit the road to go see family. She had been teasing me for a couple months telling me that she got me the best christmas present ever. She had a painting made for me that is a copy of a photograph that she took when she and I had first started dating. It was taken in my backyard while I was playing with my dog Lucy during a particularly green summer(rare.) This was when I was working as a carpenter and this was a rare day off. I had been doing a little work in the studio, you can see the clay on my shorts, and whats funny is you can see the awesome tanline on my legs from working in shorts and boots, a necessity in the Texas summer. I've had Lucy for a little over seven years, I don't know exactly how old she is but she was full grown when I got her. She was raised to be a guard dog but didn't take to it and was beaten pretty bad in an attempt to make her mean but it never worked. She was rescued and was gifted to me by a friend. She has been my constant studio companion since I first got her. She has a bed in my studio and I bring her with me whenever I can. We almost had to get rid of her a couple years ago because of her territorial issues with our other dogs but she is very important to me so I opted to micro-manage and work with her and she fits in very well now. Saybra wanted to find a way to immortalize Lucy in a painting since she's getting on in years and we're not sure how much time she has left with us. I'm particularly fond of the photograph this is based on, it was a happy day for the three of us. Best christmas present ever? That's a good possibility. 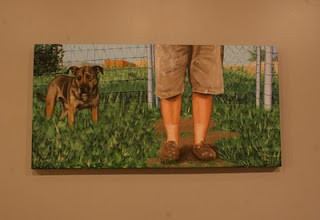 In other news the winter break from school has been no break for me. I've been potting like a mad man since school let out a couple weeks ago. I've got another firings worth of work ready to go and I am getting ready to start making some more. I've got the ACC show coming up in a couple months and the pickings are slim here so I need to bust it and get some good work done. No rest for the weary. 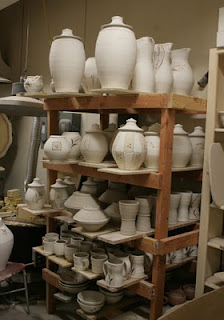 Here is a deco that I'm fond of. 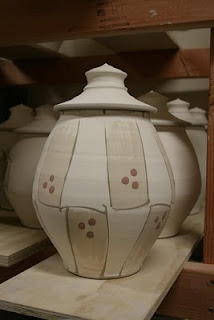 Another 1200 pounds of clay that should be ready in a couple weeks. I usually do this outside but it's a bit too cold for that. 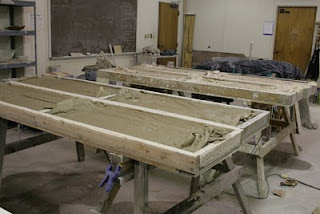 A few weeks ago I broke the wire on the cheese cutter that I'd been using since my senior year of high school. A sad day- yes, but I'll get by. For some unknown reason I threw away the handle of the cutter, I could have just replaced the wire, dumb move. I thought it would be simple to find another, I think I paid 2-3 bucks for the first one. It's a simple tool, the bent shape of the handle holds the wire real tight. The problem with most current types is that the wire is somewhat loose and can be hard to tighten. I've looked for one every time I've been out and about, even made a couple trips to kitchen stores but no luck. I searched online today and it was fairly discouraging. Apparently this type of cheese cutter has since become a vintage item. I found one on ebay for way too much money but thought to myself: vintage, I should look on etsy and sure enough I found one for a fair price. I ordered it today. The advantage to this type vs. the newer adjustable ones is 1) the tension of the wire and 2) there is plenty of room behind the wire to make deep cuts. I used to do lots of faceting years ago but now I primarily use it for cutting out the feet on my cap jars. After I broke the cutter I attempted to make one, I used an adjustable and I even tried using a cutting wire held taught between my fingers, none worked to my satisfaction. Sherrill Mud Tools makes a similar tool which is too large for my needs on top of being grossly over-priced. This cheap little cheese cutter is just right for my needs and I haven't found anything to replace it so I'm willing to search far and wide for a proper replacement. It's amazing how dependent and attached you can become on a seemingly insignificant tool. Enough about cheese cutters, eh? 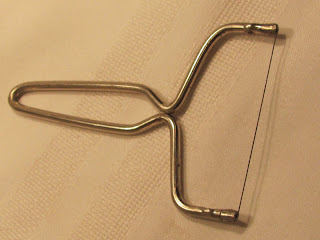 I've posted a few more pots on etsy, mostly to replace what's sold. Real gems from the last firing in my opinion. Here are a few photos. 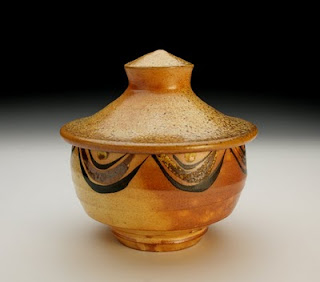 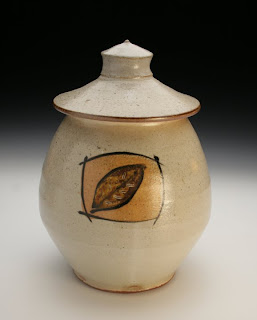 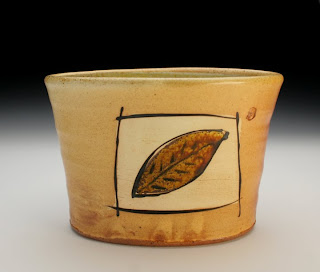 Plenty of pots over on the etsy page for our holiday sale. Go check them out!
Posted by brandon phillips at 7:01 AM 1 comment:

These pots and several more will be available Wednesday morning at 9am central on my etsy page. 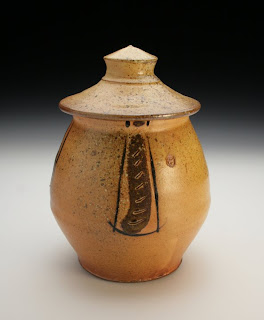 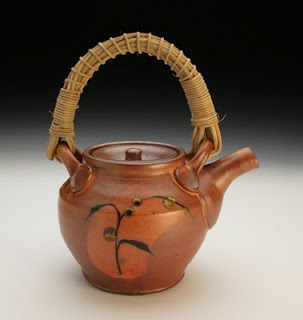 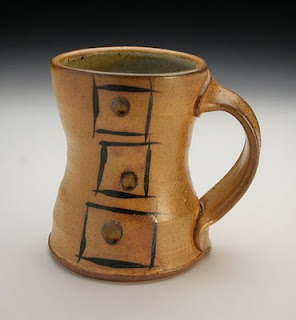 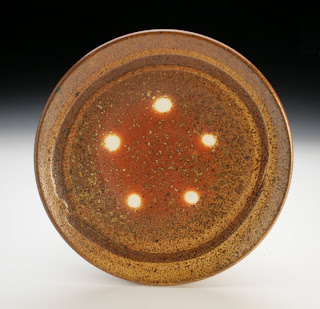 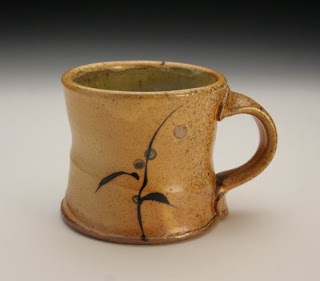 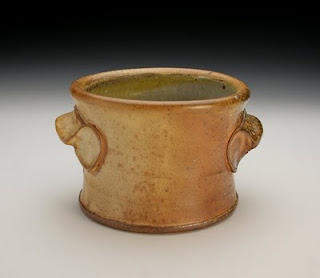 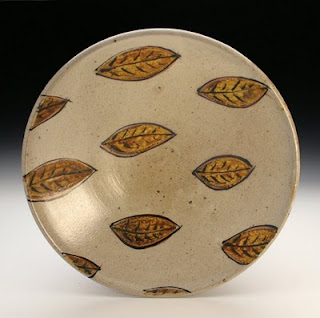 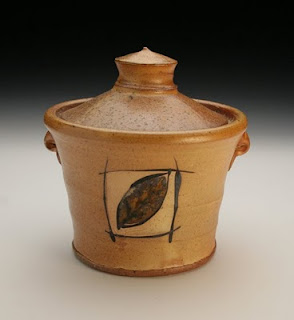 The homesale is over for the day so I now have time to post a few photos! The firing was a good one, there was a dark area that got over-reduced but overall one of the best I've had. We unloaded at about 7am on Saturday morning, the homesale started at 10. Not the ideal way to do things but it all worked out okay. The majority of pots are still sitting in the barn but we did set up quite a few in the showroom and sold a chunk of them. Here are a few pots that I really liked, some of which have already made their way to new homes.

Oval vase. Orange slip over white slip. I did a whole bunch of slip and glaze tests during the late summer/early fall, these were a couple that I liked and did a few pots with. I enjoy the contrast between these two. 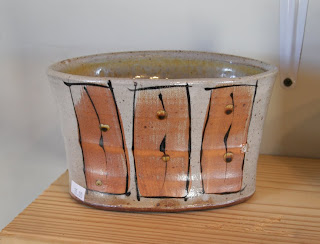 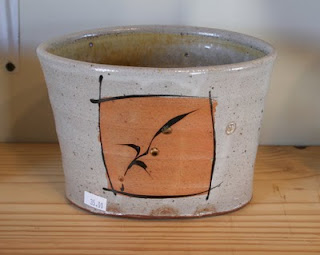 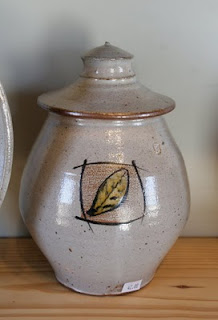 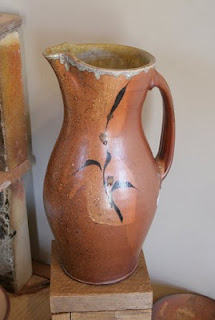 Some mugs, all tile6 slip in different parts of the kiln. 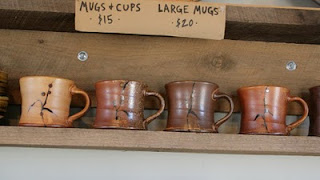 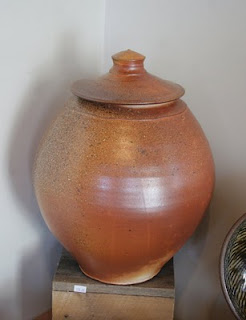 Soup bowls, the bowls on the left are stacked rim to rim. 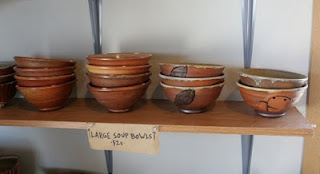 Amongst the tests I did this summer/fall I was looking for a new liner glaze. I used a variation of the old 442 ash glaze for a long time but it just wasn't versatile enough and it was this terrible pond scum sort of yellow when it would get blasted with salt. I used that glaze as a base and changed things, added/subtracted things, etc. I used the salt kiln to test because it gives a very similar atmosphere to the wood kiln. I had several tests that showed promise and then used a couple in larger batches to help ultimately decide what glaze I would use. This glaze is the one that I've chosen. It's a distant relative of 442, this one has no addition of iron so it's a bit lighter. It still yellows when the salt hits it but I like this yellow quite a bit. This glaze is also a little more versatile in the kiln. It looks good at cone 8.5-9 all the way to 11 which is a common temp variation in my kiln. 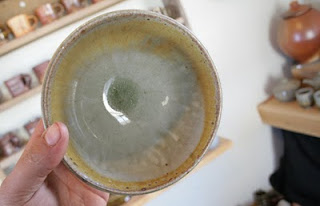 I'll take photos of more pots later on. The etsy sale will go up Wednesday at 9am.

I fired off the kiln today. It fired well, no more that 1/2 cone off in any place where there were cones. The firing went off without a hitch except for the fire dept showing up...again. I appreciate good samaritans but who calls the fire dept for smoke coming out of a chimney? Weird. I met them in the driveway and a couple of them had been here before so they were on their way in just a couple minutes.

It's really important to me and I really enjoy doing all aspects of the firing myself. Gathering the wood, cutting, chopping, sorting, stacking it. Grinding shelves, loading and firing as well. The only thing that I accept help with is the unloading and even then Saybra is the only one that I'll allow. I'd considered having help this last time around and had a couple people interested but ultimately decided to do it all myself. When we woodfired in college there was a bit of a party atmosphere. We'd all hang out and have a good time and the firings would ultimately end up uneven, over-reduced or any other mess of problems because no one was really paying attention to the firing. I've had people want to come out and fire and they always seem to want to barbecue and drink beers which is fun but the firing is a time for focused and diligent attention. My kiln holds about 200 pots which is usually around 2 months work for me(and a good portion of my livelihood), I'm not going to give anything but my undivided attention and the only way I can do that is to do it alone. So be it.

Here is the back stack. 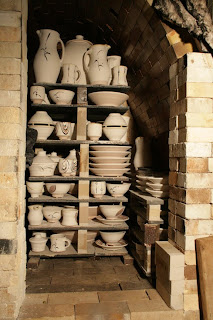 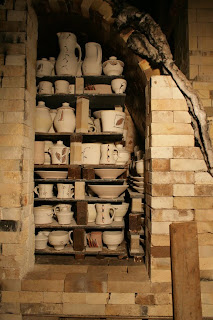 My post-firing beverage. I prefer Strongobow but the only place that carries it is all the way across town. 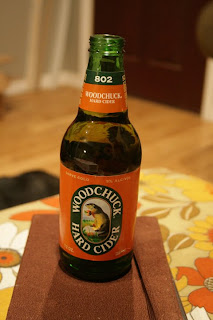 The online portion of the home sale goes up on etsy Wednesday(12/8) morning at 9am central. There will be plenty of good pots there, assuming the firing went well(fingers crossed.)