It is possible, though unproven, that I may have broken the elevator Saybra and I were riding on and gotten it stuck between floors at the Baltimore Convention Center for about a half hour. When your parents tell you not to jump up and down on elevators you should listen. Apparently you should also listen if your wife has an irrational fear of being stuck. Perhaps I'll share the whole story when we're safely out of the state of Maryland. 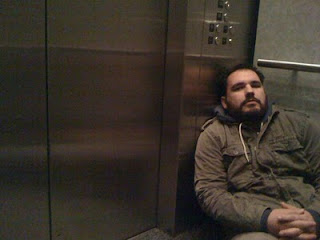 We made it to Baltimore safely, though not uneventfully but hopefully we've had our hiccup for the trip. We finished setting up for the wholesale portion today, I don't really know what I'm doing but we'll see how it goes. We built a new booth for this show, we wanted to look a little higher end than we have been. I'm very pleased, the whole new booth plus lights for the price of 3 pro panels! 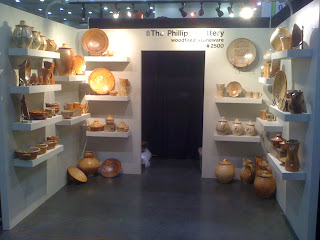 I have 5 free passes to the ACC retail show in Baltimore Feb. 24-27. If you will be in the area and have a serious interest in attending I'd be happy to pass one of these along to you. Email me by wednesday evening at brandon(at)supportyourlocalpotter.com

I fired off the kiln today, firing IX. This is the last firing before we head off to Baltimore. I woke up at 3:30am to get the kiln started, I teach a class at 1:30 so that left me a little wiggle room. I was firing on about 4 hours of sleep, these last few weeks have been some of the most insane of my life. I would like to drop from exhaustion but I just don't have the time. When one has to wake up in the middle of the night and go out in the cold to get the kiln going knowing that the firing is just the beginnning of the day(it's now 11pm and I'm still at the studio) it is amazing the places your mind will go. It is amazing the will power needed to fight the temptations of exhaustion.

I don't like rushed firings, I don't mean that I rush the firing along but rather that I don't like knowing that I have to be somewhere doing something else immediately after the firing. The firing and post firing are a time for contemplation and small celebration and heaven forbid maybe even a few moments of relaxation. All the same though I do enjoy the time with the kiln, especially early on when you can sit close and soak in the warmth before it begins to belch heat. I miss my nightime firings, it somehow becomes a more introspective experience when you're firing late at night.

Well anyways, enough of this blither. I am in desperate need of a shower so I shall retire so I can be back here at 7am.

We're heading into our third snow day. Record cold and weather, crazy. I braved the 3" of ice that cover our roads and spent 30 minutes on the 3 mile drive to the studio. I got a lot of work done, the last of the work for a firing in a week and a half...and then off to Maryland. I'll brave it again tomorrow to spend the day at the studio. Supposedly this stuff is going to start melting away on Friday. Lets keep our fingers crossed.

From the most recent firing. I'm pleased. 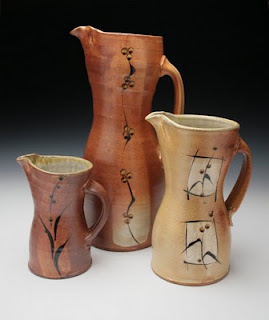 Yesterday was sunny and 62, it was beautiful outside. Today it is 15 degrees and windy with 6" of snow. This weather is not typical for this region, we don't have the infrastructure to deal with it so when it does snow the world stops. But, nothing stops the kiln unloading.

Saybra came with me out to the kiln and snapped a couple of photos with her phone. 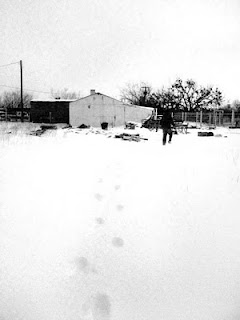 This is part of the bone yard, pots that cracked or chipped and have been given pre-retirement leaned up against the wall. 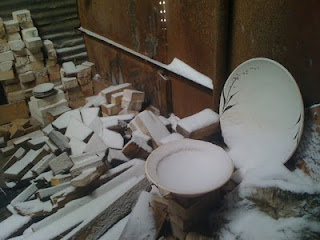 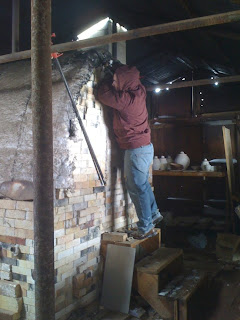 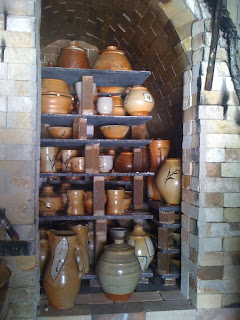 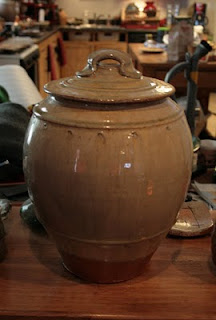 Cheers!
Posted by brandon phillips at 11:21 AM 6 comments: