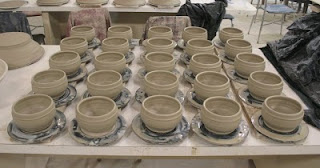 Here is a finished soup bowl I brought from the showroom to model. These are kinda labor intensive for a small piece(for me anyways): they have a pulled handle and a turned foot, how crazy is that?!! Everytime I make them I wonder why I don't just leave a flat bottom on these and cut the turning(aka:trimming) stage out completely. Then I remember my committment to craftsmanship and pride for my work, oh yeah.... I like to do what industry can't or won't otherwise what's the point? 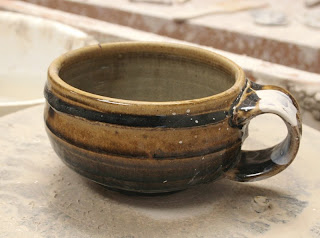 Here is a short video of Willem Gebben-one of my favorite potters, if not the favorite. The narration is...well...you'll see. Kent Harris found this and shared it on Facebook and now it is my gift to you. Enjoy.
Cheers!
Posted by brandon phillips at 9:42 AM 3 comments:

The first week of classes is over, it was a bit of a stressful week but I think I have everything under control. I have 3 classes this semester, about 30 students in all. When I started teaching here I had 2 half full ceramics 1 courses and no advanced students or majors. The basic classes fill up every semester now and I have a good grouping of advanced students with a couple of majors. I've really enjoyed getting to build my own program and the students have responded well. I'm honest with them and I don't pull any punches and while they piss and moan sometimes I think for them having a teacher who is real with them is a breath of fresh air.

Anyways, here is the assignment board for Cer. 1-3 with their first assignments. I give them a rather open-ended assignment to start with and it is just to get them back to work and in the groove. 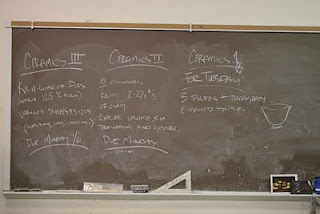 I had the good fortune of getting to spend the day in the studio. I made a bunch of mugs, dinner plates and some serving bowls. You know, the usual spread. Here are some freshly slipped mugs. I'm shying away from using slips on my work for awhile, at least until I get back into the wood kiln. That may be awhile but more on that in another post. 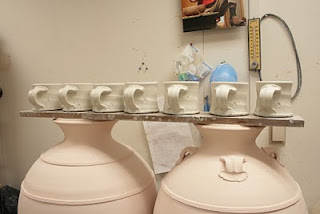 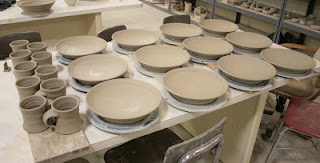 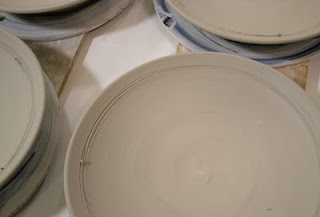 Perhaps my favorite decorating tool is a jigsaw blade. It makes this mark along with many others. 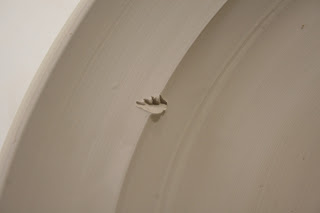 Porcelain yunomi with feet inspired by another potter. Care to take a stab at it? 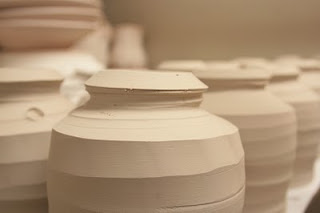 The shelves starting to fill up, it feels good. It's been a long time since they've been full. 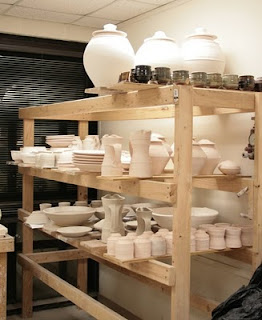 Here is an angle I've never shown before. This is my studio from the other side, if you were sitting at the wheel. Messy isn't it? I could clean it, but I'd rather make pots. 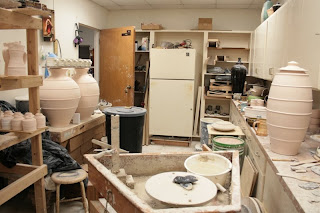 Well that's all for now, cheers!
[This post brought to you by the Pilcher Blog Post Relevance Rating System for the Elevation of Ceramics(PBPRRSEC) which rates this post as a 3.1 on the 1-10 scale.] ;)
Posted by brandon phillips at 8:59 PM 9 comments:

My clay order came a little late this year. The only problem is that now I can't procrastinate and move this 8950 pound pile little by litte. Ah well, I could use a good workout. 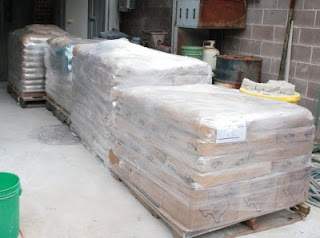 In other news I sold all the brushes I posted on etsy. I have some more I'll post this evening. I just ordered some more supplies and the next batch will go up a bit in price so get em cheap while you can!
Cheers!
Posted by brandon phillips at 10:34 AM 4 comments:

I've posted some brushes on my etsy page if you are interested. They are $10-12 each with free shipping in the US. The tips are made of deer tail(white tail) and the handles are black bamboo. The ends are coated in epoxy to help prolong the life and there is copper ring on the end to hang the brush from. 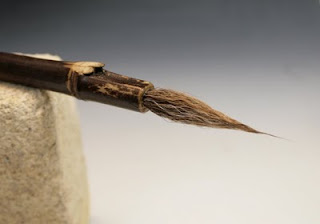 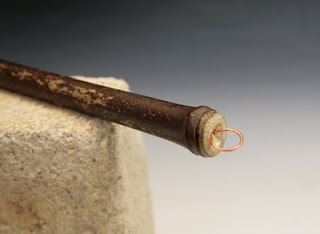 Ok. It's time to get back to the pots.

I've been staying busy this week. I've spent some time in the studio on pots and some time at home making brushes. Why so many? Well, like pots practice makes perfect and I've got some big plans, we're gonnna make millions. Okay, not really but I enjoy making these things. I'm going to put some up on etsy in the next few days. 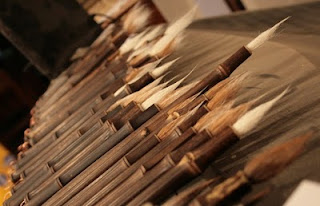 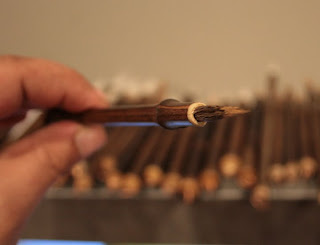 I'm working on a small dinnerware set, the best part? When the customer says: "Make it however you want." Aces. 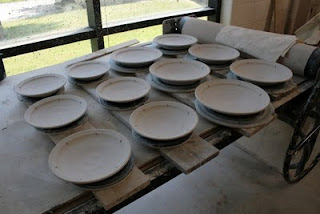 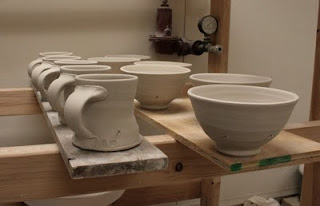 This customer wanted a way to signify that this set was made specifically for him so I made a stamp. Happy to do it. 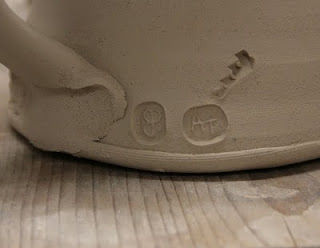 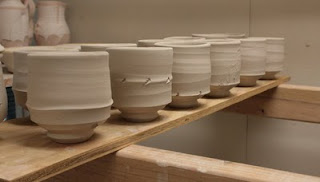 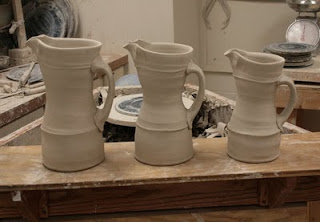 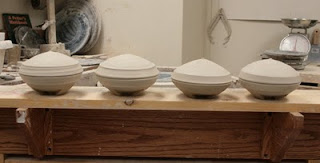 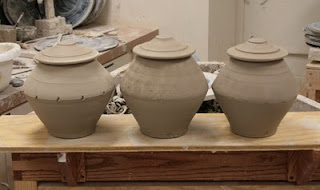 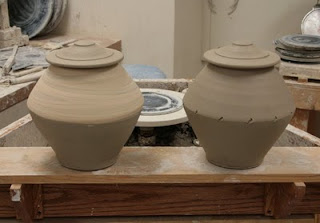 One of our sinks at school was backed up so I pulled the trap off and found 5, that's right 5 small paint brushes lodged in the trap along with a lot of sludge. I'm guessing some genius was trying to unclog the sink with a brush...repeatedly. That's all for now.

Back in the studio.

I'm back in the studio this week, I spent a couple days up here last week helping a friend get some firings out. I've finished up another dinnerware set and hope to get it fired in a couple weeks.

I finished up my last day with the contractor on Saturday. I ended up getting royally screwed on my pay, he retroactively decreased my pay so that he only had to give me a little bit for the last week and a half. His argument was that he was losing money on his jobs because they were taking so long. Well, don't take vacations in the middle of your jobs and don't fuc*king hire someone if you can't pay them. I ended up making minimum wage for the last 3 weeks. I could've made more working at walmart(with AC!)...jackass. Pardon my filthy language, rant over.

In other news someone has stolen my camera out of my locked office on a weekend when the building was locked. Suspicious? I think so, does the univeristy police dept think so? Not really. I wasn't expecting to get my camera back but I was expecting a little more than "Hmmm, that's interesting." A little camera is no big deal but if they have access to my office they probably have access to everything. The only people that have access to the building and my office on the weekends are the janitorial staff. I'm not a detective but I'm pretty sure I figured this one out.

Well, anyways I'm back in the clay and school is starting in a couple weeks. I'll be firing the salt kiln in another 2 weeks or so and then I'll hopefully be switching back to the wood kiln.

I sent the brushes out to seven people. I had many requests so I picked the first seven emails that I received. They should be there this week sometime, sorry it took so long to get them out. I learned a little trick that has improved the quality so I'm much more confident in them and I'll be making some more soon which I'll be selling cheap on etsy, so keep an eye out if you're interested.

There are also lots of good pots on my etsy page if you're interested!