I'm sorry about my extended absence here. I'm wrapping up that kitchen remodel this week and then next week we are going to Minnesota! We are in serious need of a vacation that doesn't revolve around a show so we are going to take a little road trip to my home land for a few days. We are taking back a few pots from the Deep Roots show that didn't sell but other than that...no plans, maybe we'll go find a lake and camp out. It'll be nice to have some time to relax before the school year starts, it's been go-go-go since Christmas and I'm pretty worn out. The wife and I are both workaholics and we don't take time to relax as much as we should. Once we're back I plan to make pots...lots of them. I'll be refreshing my etsy page as well with some great pots. My apologies if you don't hear from me for awhile. 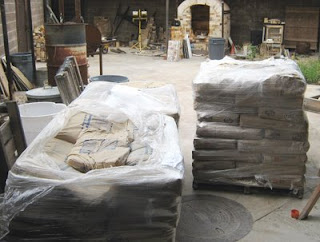 Here is another Mackenzie video, I think he has some really interesting things to say in this one. I should probably make some pots so I can have some more content on here! Clay in the racks, pots soon!

too bad "sawdust and dirt" is taken.

Well...I'm still here, though not doing much in the way of pottery. I apologize for not keeping up with this thing but I've been working the past week on a kitchen remodel and I'm sure it's not of all that much interest here. I didn't really need the work but I don't have much to do right now so I suppose it's best to stay busy and make a little money to boot. I've made all new cabinet doors and new drawers & drawer fronts along with tearing out a wall, everything should be installed in the next week or two. Sawdust is not as nice as clay dust...but it's a working man's dust all the same. Beats a desk any day of the week.

The show in Rockport a couple weeks ago was a total bust. We came home in the hole, the second time ever that that has happened to me. This is the first time I've been thankful for the teaching gig, had a paycheck waiting for me when we came home. The crowds were there but they weren't buying squat except for jewelry and multi-thousand dollar sculptures(no joke!) It was a pretty miserable experience...Texas heat, sandy wind( =sandblasted for 8 hours straight)and to top it off we had several total douche-bags come through our booth, my wife almost took a pot to somebodies head. I don't like to complain so I'll leave it at that.

Our showroom is completely stocked right now and I have about half a kiln load sitting on the shelves waiting to be fired. For some reason I'm completely unomotivated to make pots when the showroom is fully stocked, it's easy to get down when the pots aren't moving so I just turn my attention to other things. I'll be mixing clay here within the next few days so there will be some pots being made in about 3 weeks or so. I have some porcelain waiting to be made into a couple dinnerware orders. They were supposed to be done about right now but I've really had difficulty forcing myself to get in the studio, hopefully I'll get them made and fired off next week.

In other slightly cheerier news, the wife and I are drawing up plans to build a studio on our property sometime...hopefully soon. She really wants some darkroom space(she's a photographer) and for me working out of the tiny jail cell sized studio at the university isn't cutting it. There is a space on our property currently where I used to work that can be seen here. It's an old concrete building with no insulation, heating or cooling, or running water. The roof is in poor shape and it sits slightly below grade so when it rains the walls and floor becomed very wet(not flooded but rather as if someone had hosed it all down.) The ceiling in there is only 7 feet, I'm pretty short but it drove me absolutely nuts! Needless to say it's not suitable as a working studio. So anyways, this one's going to have to be done legally(unlike the showroom) so it'll probably be awhile.

So long for now.

ps: just heard about Otto Heino's passing. Kidney failure I think? I didn't really care for his pots(or his rolls-royce) but he did have a great impact on the arts and crafts movement and pottery in general. The dude had a great energy and made tons of pots...sad to see that go.
Posted by brandon phillips at 8:18 PM 5 comments:

Here are some of the pots that I thought came out really nice. 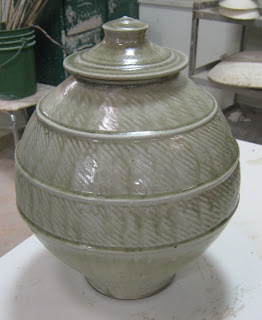 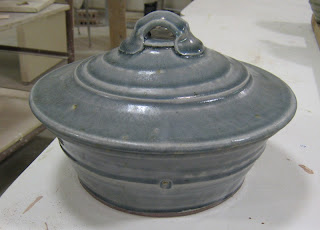 I've sized this one large so you can better see the crackle pattern. 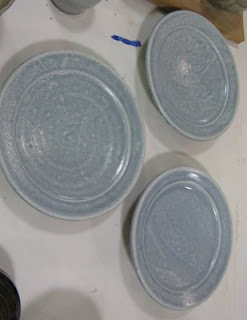 This is a cone 6-8 amber glaze that I'm trying to adjust for the cool spot in my wood kiln(cone 8-9ish) This is the original glaze at about cone 9, nice but obviously too runny. 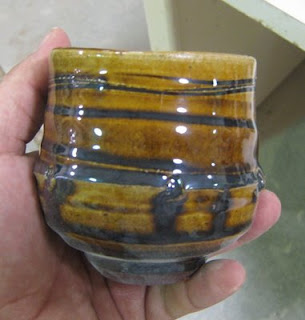 This is a picture for Joe. When I make the spout the I collar in the top so it's leaning inward and then pull the edge out a bit like a pitcher spout. Similar to Clary Illian's teapot spouts but not as dramatic. 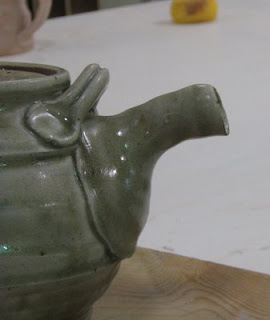 Leaving at 4am for a show in Rockport, TX. It's on the coast and it's always beautiful there, I'll take my camera and snap a few photos.
Cheers!
Posted by brandon phillips at 12:29 PM 8 comments:

My 100th post coincided with one of the best firings I've ever had and now this is my 200th post and it will commemorate the 2nd worst firing I've had. The firing itself looked really good, the glazes were really nice, but...that whole putting salt on the shelves didn't work out too well for me this time. I've done this before several times in my old gas fired salt kiln. When I was firing glazed ware but wanted a little flash...just put a pinch or 2 of salt under the pot. That kiln had atmospheric burners, this one has forced draft. So my theory is that they blew all the salt off the shelves which then settled on the bottom couple shelves and did what you see below to about 40 pots. Eh, what can you do. I heard Sam Maloof say on the Craft in America series that rejection is good for the ego...to that I will add failure, these things happen I suppose. 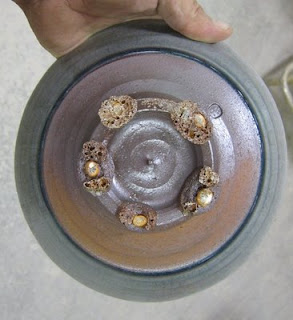 I've seen a lot of weird stuff happen in kilns...but this is by far the most bizarre. 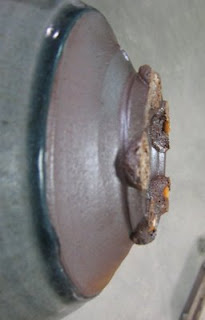 In case you were wondering, yes, the wadding did melt up into the foot of the pot.

The rest of the firing was pretty fantastic. 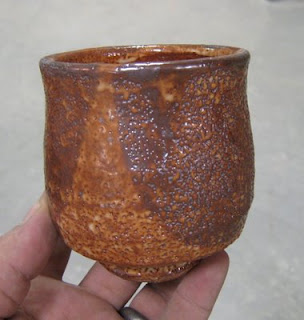 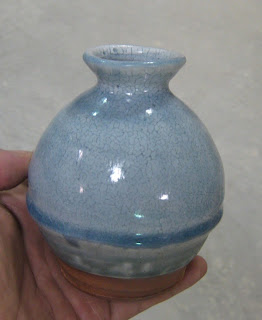 This was my favorite piece in this firing. 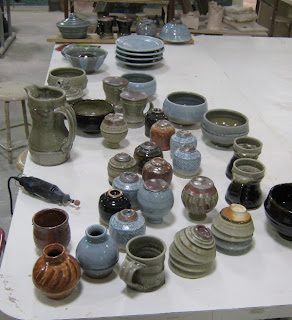 Pots that need a little grinding. Mostly it was just wadding stuck to the bottom of pots in the middle of the stack,easy fix. The top was practically salt-free.
If you're in the area come check out our seconds table...it'll have a few more pots on it next week.
Cheers!