i just finished firing off a bisque, the second to last bisque i'll ever do, in this studio anyways. i'm hoping to get a glaze firing done this weekend. but of course, something always seems to come up. we have had a couple of weeks off between jobs so i had hoped to get some work(pots of course) done. i spent one of those weeks in recovery from one of the worst battles with the flu that i have ever had. i spent the second week upgrading our electrical system from an old screw in type 60 amp fuse(original to the house circa 1943) to a 200 amp circuit breaker panel. i got much of the work done before attempting to obtain the permit....but then was smited by the city inspector. it seems that since the house is in my fathers name and has not been transferred to mine i cannot obtain a homestead exemption to do work on my house. in texas if you are a homesteader(own and live in your house) you can do all the work that normally must be done by a licensed contractor(electrical, plumbing, hvac, etc.) long story short, i have to pay an electrician some exorbitant amount of money to look at the work that i already did properly, all because of a paperwork technicality. i feel as if my hands have been bound in red tape, sometimes you just gotta love the system.

i will end with this quote that scott cooper left on his blog by sculptor Stephen DeStaebler:
"Artists don't get down to work until the pain of working is exceeded by the pain of not working."

i'm feelin the pain.
Posted by brandon phillips at 8:50 PM No comments:

new addition to our family 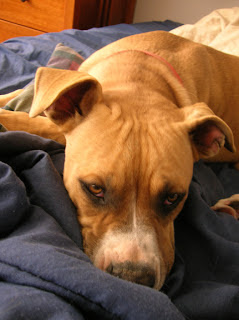 this is the newest addition to our family, though she may be just temporary. we found her in our driveway the other night. she is a boxer puppy, i'm guessing just under a year old. we have used several resources to try and find her owners with no luck. she is already house broken and has such a sweet disposition. the only drawback is that we already have two adult dogs, a shepherd/pit mix named lucy and a basset hound named niles, and lucy can be somewhat territorial when it comes to other females.
we are going to name her either kaylee or penny. kaylee after the mechanic in the

i promise the next post will have something to do with pots.

it feels like years since i've been able to get into the workshop. work keeps me away during the day and the cold keeps me away at night. my workshop is unheated so late nights during winter aren't happening. i've also been sick off and on since october. i've been out of commission this whole week due to what i'm guessing has been the flu. yesterday my body hurt so bad that i couldn't even get out of bed, but today i feel that i'm on the mend. i have two shows coming up on back to back weekends in april so i need to get the kiln going. which means that i have to get this pile of lumber cut. 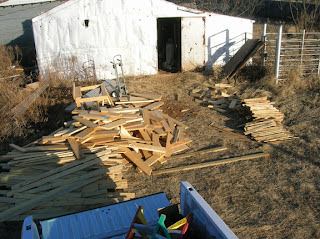 i can gather a pile like this in a few hours on a saturday afternoon. i believe this was five truckloads. its hard to tell because of the angle, but that pile is nearly four feet high. the lumber nearest the truck was a lucky score, about 200 pieces of fence that were too crooked to be used. the builder recieved a credit for them and was just going to toss them. i don't think people realize the vast amount of waste created while building a house. i am able to gather more than enough wood from 2 or 3 house sites in an afternoon, and i am being picky about the lumber i am taking(no nails, concrete residue, etc.) over the last few months i have also collected enough waste and culled lumber to add a covered porch and master bath onto the back of our house. it is such a wasteful industry, but i am glad that i can do my part to help reduce a small part of that waste.
we're looking at some time off in the next week or two so i'll try to do a couple firings and get some more work produced.
stay healthy.
Posted by brandon phillips at 12:12 PM No comments: