These are a few big pots that I'm excited about.  The middle one is about 24" tall.  I have a few more in the works.  It will take awhile to get them all fired but when you're excited about what's happening it's best to indulge in it, right? 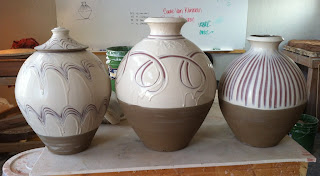 I'm back from another year at the ACC show in Baltimore, I wish I had better news to report but it was mediocre at best.  I picked up a few new wholesale accounts which is great so that will give me plenty to do through the summer.  Here is a shot of my booth during wholesale: 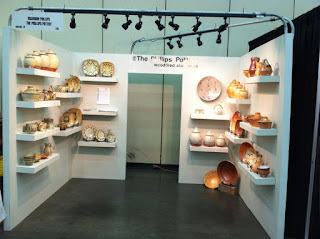 I took Will, an old student of mine, with me this year.  He's in graduate school right now and is interested in what it takes to make a living selling pots.  While I don't necessarily have that figured out I needed the help and he wanted the experience.  Since I wasn't paying him with money I did my best to teach him what I know, pay him with experience.  I am definitely not a great salesman but I have learned a number of things over the years.  There were a number of retail buyers (and one wholesale account) who came into the booth obviously attracted to something, but perhaps not sure what that was, and instead of letting them wander out I engaged them and ended up selling them work.  I would engage them before they had a chance to leave and just start talking to them about pots.  I have a number of questions I ask and when I finally hit on one that they know nothing about I go into my spiel.  I explain the process, my local materials, influences, etc.  Then I ask about them, why are they at the craft show, what are they interested in seeing, what have they already bought, etc.  Engage.  I am a bit of an introvert so that was a hard journey for me but it's second nature now.  Will was amazed at the number of sales we made just by simply striking up conversation.  It goes back to the theory that people don't just want your pots, they want a story and an experience. So hopefully he learned that we just don't make pots, we have to sell them too.

I met Bill Van Gilder a couple years ago and we've stayed in touch through email and facebook.  A few months ago I was lamenting my lack of a pugmill and he told me about one he had that he would let me have for a steal.  Convenient that he lives an hour from Baltimore.  So here is the old gal, she's a beast.  It needs to be cleaned out and a couple minor parts replaced and it will be good to go.  I'm excited to save some strain on my arms and wrists. 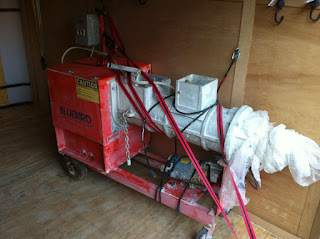 This is me, my assistant Will and Bill Van Gilder at his pottery in Gapland, MD. 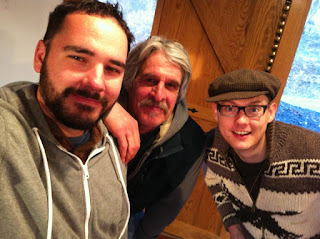 On the way back from MD we stopped in NC to visit the guys.  We had a nice one day pottery summit, talking shop, drinking beer, shooting the shit and gettin rowdy.  I got to meet up with Kyle Carpenter and Scott Cooper-who had recently finished his stint at Penland, along with Ron Philbeck and Michael Kline.  Here we all are at MK's pottery.  We had a good old time.  This is the first time I'd actually met Kyle and Scott even though we've been corresponding through blogs/email/facebook for years.  It's funny how we just fell into conversation like old friends.  I wish I lived closer to these guys but that's life, ain't it? 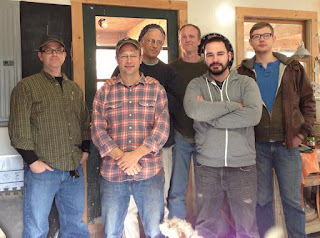 Here is a poster some student made for my MFA show (it's nice to have student workers.) 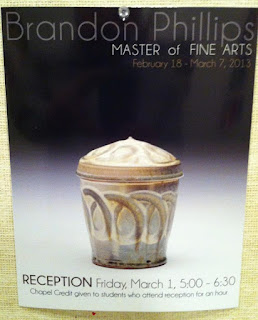 The week before I left for Baltimore I had to install my MFA show.  It's been a strange journey the last 2.5 years.  I can't believe it's already over, I feel like I just started.  While I didn't see a huge shift in my work I do see a lot of things that changed because of that experience.  I did have the great fortune of already having a cohesive style and clear direction for my pots, so rather than fretting over finding a style I was able to focus on subtleties and details.  I did have a new body of work emerge but that strangely enough didn't happen because of graduate school, but purely through experimentation, but the crits helped me refine that work.  I was also grateful that they didn't try to change me, I see so many programs where students go in as potters and leave as sculptors, or worse yet vessel makers.  I jest of course, but they did take me where I was and help me refine the work and attempt to make me understand more about why I make the work I do.  In Joe Bennion's film "a potters meal" he says something to the effect of: if I could put it into words then I wouldn't have to make pots.  In one respect this is completely true...in another it's a cop-out.  One does of course need to have the ability to speak about their work.  I remember having to write a paper: 10 pages on what it means to be a Leach potter.  On the surface it seems so simple, but think about it.  What does it mean?  I recall spending far too much time staring at a blank screen being frustrated and screaming to myself "what the F**K does it mean?!!" Well, I struggled through that one, I prefer to make pots rather than to intellectualize them.  I'll save that for those to whom it is better suited.

Here are a few shots of the show.  I feel pretty good about these pots.  The show was about 2/3 the new slipwork/ash glaze combo and the rest of it the usual brushwork fare. 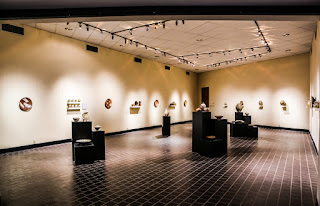 This bottle...I wish you could get up close and see all the crazy stuff that is happening on the surface.  One of my favorites. 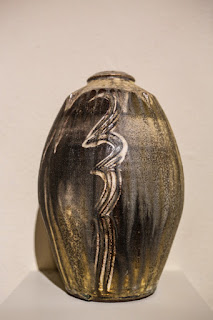 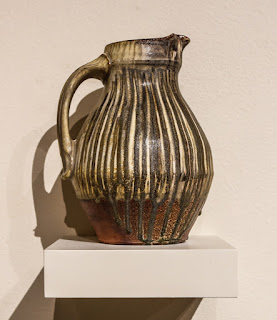 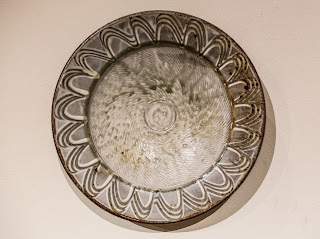 Dessert plates hung on the wall to mimic art. 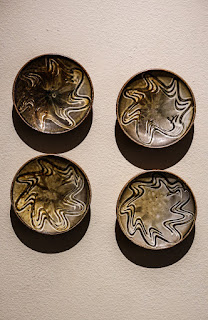 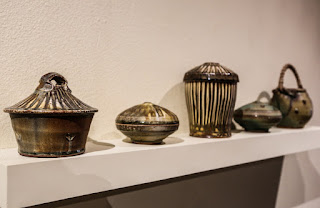 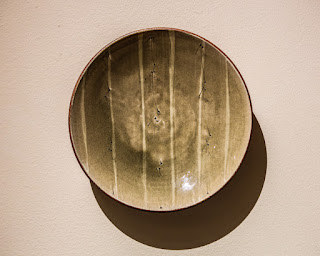 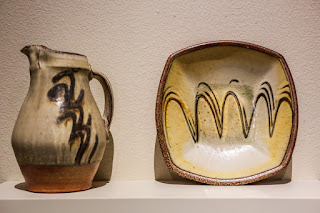 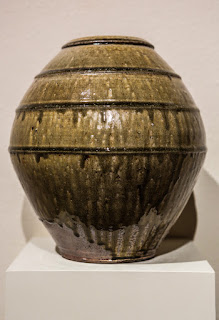 That bowl right there...I like to keep my ego in check but yeah, that bowl is the shit. 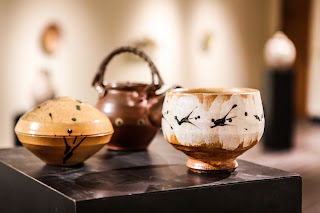 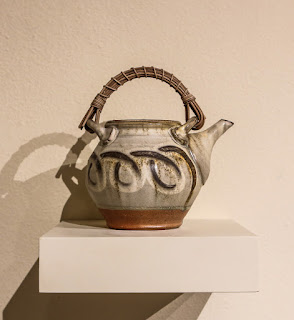 Well, that's enough blither for now.  It's nice to have time to sit and write a post.  I have some free time over the next few weeks, free time-what the hell is that?!!  In April I'm going up to Minnesota for the ACC show in St. Paul, so that and filling a few orders are the only thing on my plate for the next 8 weeks.  Pretty nice.