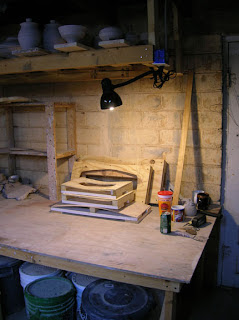 this is my "new" workspace. i've been doing a little slab work this last week, so i set myself up a little area that i could dedicate to slab work. i've had a lot of ideas floating around in my head about some slab serving platters, so i finally made myself get to it. the process i use is fairly simple. come up with a shape and cut it into a piece of wood, cut your slab larger than the hole and drape it in, you can then manipulate the shape in the hole. i always thought this method was interesting but i didn't get into it because no matter the shape you're always left with a flat rim which is ok, but why not just throw and alter it? thats easier for me. then i discovered that Randy Johnston curves his plywood forms, which can give your forms compound curves(curving in all directions) which are so much more visually interesting. 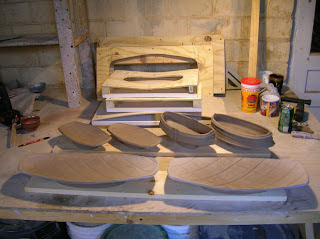 these are the fruits of my effort. the large ones are about 21 inches and the small ones are about 12 inches. one thing that has always turned me off to slab work is that its just such a static surface. throwing allows me leave such a lively surface with a lot of gesture, so its very difficult to work with soemthing that is cold and flat, its just hard to my hands around it and leave a mark. i scrape the the slab to give it a little texture and use a rib or a roller to give it another layer of texture. i treat the outside edges much like i do the bottom of my untrimmed pots, rubbing it over to give it a rougher, slightly unfinished appearance. the boat forms are only a slab on the base, the walls are thrown in a ring and then cut up and attached, i cut them off when they're just dry enough to handle so that i can manipluate them and get some really nice edges and a bit of a handled look. the pedestal feet are much the same, i think it gives them a bit more formal appearance. i really like to make pots with formal shapes but with very loose gestrual surfaces, its a nice juxtaposition. 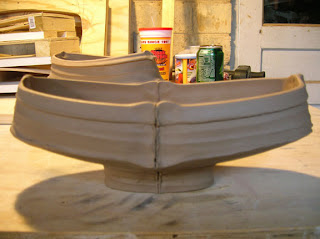 i've always been intrigued by this form, this particular one is a bit of a rip-off, but i will contine to work with it and make it into my own thing. its always been helpful for me to try to emulate pots that i really like so that i can see why i'm drawn to them so much and then hopefully take some of those qualities and use them in my own work. 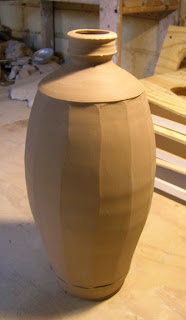 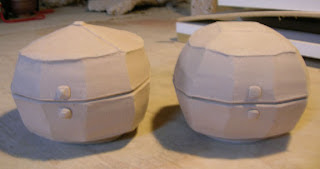 these are thrown in two pieces and then put together and beaten into a sortof square and then faceted.

i cast the rest of my chimney for my kiln this today. it was quite a bit more difficult than i had anticipated, moslty because i cast it in place which meant that i had to haul all the mixed castable up to the roof of my barn. but.....bisque this week, first firing before thanksgiving. keep your fingers crossed.

on a sad note, a shelf holding three mackenzie platters fell this week in my kitchen. one miraculously escaped unscathed, my favorite completely shattered and another one just lost some small pieces. those platters have been sitting on that shelf for over 5 years when not in use, so its a bit of a mystery how they just toppled over, i have a shelf with many yunomi right next to it that didn't move a bit. i was going to post a picture, but it hurts my heart a little too much right now to have to look at them. i think i'll be able to glue one of them back together, but the other may be a lost cause.