We've had a bad year as far as pottery sales go so I've been forced to pick up my tool belt again and get to work. The only difference this year is that I've had to go work for a contractor rather than working my own jobs. The contractor I'm working for likes to overbook and I'm the only employee of several that is well-rounded enough to work without his guidance so he'll go off to other jobs and a lot of that pressure falls on my shoulders. I'm also having to teach the guys I'm working with which is fine but it certainly slows work down to a crawl. This week he is gone on vacation while we are working overtime to finish a job by Thursday. We've worked long hours everyday, most days are 10-12 hours. All this for $10/hour. Crappy pay for my skill level, but he's the only guy that would take me on for just 4 weeks. So here I am on a Sunday firing the gas kiln at the school so my summer school students can have the last of their pots. The firing should've been done around 7pm but rain tripped the outlet to the burners and I didn't catch it so that tacked on about 3.5 hours and I gotta be up at 6:30 for another 10+ hour day in the Texas summer. Do I sound frustrated? Probably because I am. Ah well...what can you do?

For those that don't know, I'm not full-time faculty. I'm an adjunct/artist-in-residence but I'm also the only ceramics teacher so I'm free to run the program as I see fit which is pretty cool. But in case you didn't know adjunct=joke pay. I don't hold a terminal degree(MFA) so a full-time slot is not available to me. So as long as that's the case I'll be doing side jobs until pottery sales come back up.

So hopefully this will be my last week and I'll get back to the studio soon. More importantly I'll get those brushes mailed out, they're coming. It'd be nice to have a free minute when the post office is open. Well anyways, time to go check that kiln and see if cone 10 will let me go home.

This has been floating around for a bit already but I'll post it here anyways. Warren is the potter/person that has had the largest impact on my life. Maybe I'll do a post about that someday. This was recently done and he sounds much better than when we saw him in 2008 and light years better than 2007. I have another post in mind and maybe I'll get to it tomorrow.

Here are the finished products. The tallest one is about 32" and 21" wide. 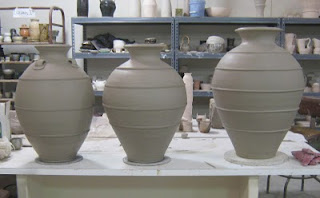 Touchy pedal makes pots fly. At least it was the weakest of the bunch. 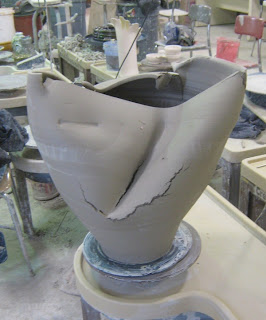 Because you're only young once.

I'm thinking that they're still not big enough, I could go bigger. Whether or not these make the cut when they're finished remains to be seen. 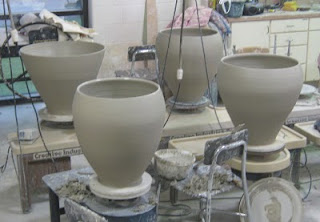 We were at starbucks a few weeks ago and saw this. Read the print on the box. Suspect? I think so. 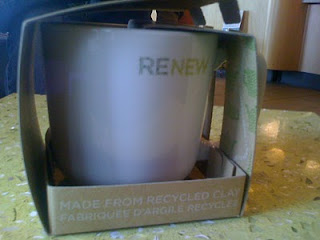 I awoke this morning to some news I didn't want to hear(irrelevant to the blog, at least for now) and it immediately put me into a bad mood so I decided to spend my day alone in the studio. I haven't had a completely free day in the studio since probably early January(?) I spent a couple hours working on cleaning the classroom(by choice) and busting up dried chunks of clay. I have/had about 2-3 barrels worth of dried student clay and I decided this summer to deal with it. It's all in giant chunks so I have to bust it up into small pieces and soak it back into slip and then remix it with dry mix. I've made it about halfway through. Man, what I'd give to have a student worker...

I did get to spend some time on the wheel though. I had about 100 pounds or so of clay left from my old batch. The last of it is always a little stiff and I put off having to work with it because I hate throwing with stiff clay. The advantage though is I get to make some larger pieces which I don't do too often. These larger jars are 15 pounds. I can't remember the last time I've thrown that much clay into a vertical piece(as opposed to bowls which I do all the time.) I've resigned myself to mostly making them in pieces so that I don't have to deal with stiff clay. It's a pain in the rear to throw a huge cylinder on a treadle wheel, more trouble than it's worth. I also made a bunch of bowls but they're out of frame.

When I'm making large pots I prefer making lidded jars to vases or bottles. I wonder if that's indicative of my personality? Hmmmm..... 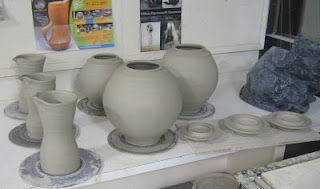 These pots are an addition to some dinner plates a customer bought last year. These are porcelain, I didn't need much so I bought some pre-mixed to make them. This stuff was so wet it was almost sludge. I had to throw it all on bats because there was no way I was getting this stuff off without ruining it. 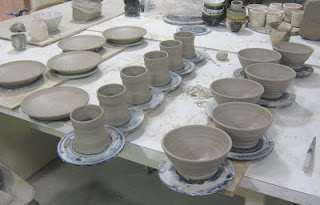 When I was at the clay supplier I bought a couple of new tools. When it comes to clay I'm not much of a tool guy. Sponge, needle, wire, 3 wooden ribs, one metal rib, one trimming tool. I use a dolan loop tool for trimming, they went out of production with their tools for a few years and who knows if that'll ever happen again. I think they make the best trimming tools, so I bought a another backup and I picked up this smaller loop tool which might make trimming yunomi feet easier, it's a little difficult with the bigger one. I also bought this faceting tool, mostly because I like the way it looks and it's nice to support potter-tool makers. I don't imagine I'll use it too much but it'll be a nice tool for demos with my students. 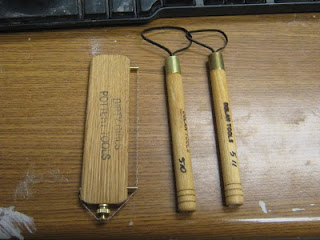 Speaking of making tools I've been dabbling the last few months teaching myself to make brushes out of deer tail and bamboo. I made some a couple years ago that performed fairly well but they're worn out and I've since figured out how to make them better. These are the ones that I use now. 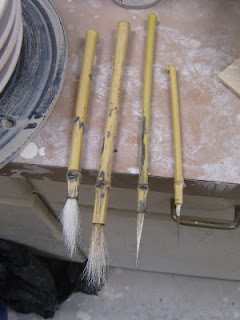 I figure the process of making good brushes is just like making pots. You gotta make a few hundred before you get good. Here are some that made the cut that I just don't need so I have an idea. As a special thanks to my regular blog readers I will send out these brushes to the first readers who email me wanting one...for free!!! The only catch is you gotta let me know if they work and if they hold up, don't worry you won't hurt my feelings if you don't like them. Don't expect superior quality yet. I only have 7 or 8 so first come first served. email: brandon(at)supportyourlocalpotter.com I'll try to get them out later this week. 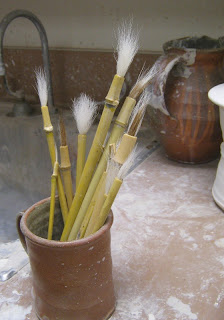 That's all for now, cheers!
Posted by brandon phillips at 8:39 PM 6 comments:

I got about 10#'s of my new clay body out of the racks today and I made a bunch of test pieces with it. The rings will be cut into pieces for glaze tests. The cups are made from 3/4#s and are for further testing of glazes that show promise. The new clay body is based on the old one but I cut out the goldart and significantly increased the kaolin along with replacing the 35 mesh fireclay with 50 mesh. I want a lighter body so this should be a good start. I mixed up 2 batches, about 650 pounds altogether. That should give me some good insight. 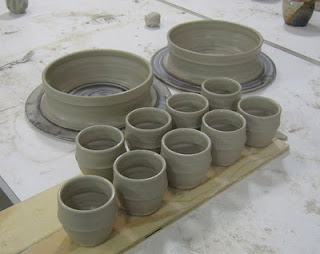 I had only 6 students in my summer class which is nice but it's hard to fill the gas kiln with only 6. I don't like the first semester students to have to commit all their work to one firing so about 1/3 of this kiln load was mine. This firing was weird, the left half of the kiln reduced just fine and the right oxidized. I've heard of this happening before but it's never happened to me. Don't get me wrong, I've had my fair share of bad firings but this is a new phenomenon to me. This large jar sat right in the middle of the top and got half reduced and half oxidized. It made me really mad at first but looking at the photo I kinda like it. Maybe it'll grow on me. 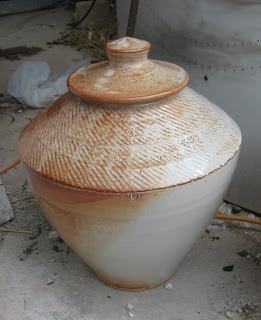 This is my ame glaze in the slow cooling gas kiln(it takes 2.5-3 days.) It's also incredibly reliable...go figure. 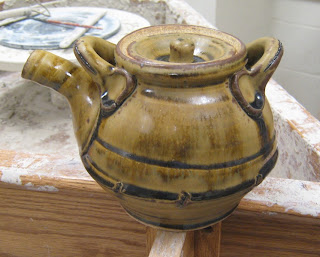 The customers for the dinnerware set I just did had one request, apples, but in my "style." At first I cringed a little and thought seriously about passing but they're friends...and then I remembered this Scott Roberts cereal bowl I have that has an apple-esque design. In an attempt to be completely unoriginal I copied his apple design after much practice at trying to come up with my own. Guess Scott's getting added to the list of potters getting a royalty check from me. 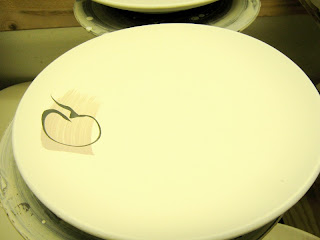