i'm back and still no pots.

Well, I'm back. I arrived home Wednesday afternoon(which coincidentally was my 28th birthday) after a week of helping my brother do some renovation around his home in Kansas. My brother is almost seven years older than me and we were never all that close so we don't spend much time together, we joked that this was probably the most time we'd spent together since I was about 8 or 9 years old. I always thought that my brother and I were like night and day, he was an accomplished athlete in college and married the homecoming queen. He is now an accountant and a happy suburban homeowner with 2.5 kids and the proverbial picket fence. I am not any of those things. Though we are different in lifestyle we have the exact same personality. I was amazed at how well we got on together(not that there is any tension there, we just don't know each other all that well) strange, huh? 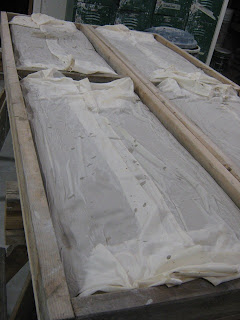 Anyways, back to business. I have about 1200 pounds of clay in the racks right now, the batch outside is just about ready and the batch inside will need a few more days. I also have a small batch of porcelain reclaim that will be ready in a few days as well. 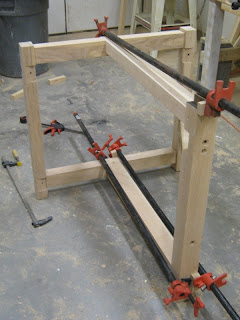 I have been messing around in the woodshop the last couple days working on my treadle wheel. I had to redo a few pieces after the green lumber fiasco but I now have all the pieces for the frame finished. The plans call for this whole thing to be able to be disassembled and held together with bolts. I had a few joints that I felt were questionable so I felt that gluing this part of the frame together and bolting the rest would be the best solution for me. The problem with gluing the whole thing together is 1) it's freakin heavy, and 2) at 34" wide it will only fit through 36" doors. This seemed to be a decent solution for me though it'll take up some real estate when we move some day.

I'm teaching a summer class that will start on Monday. That will keep me occupied in the mornings and I hope to make enough pots to fire at the end of June. I'm thinking of making some pots for a redux. firing in the middle of June, we'll see if that happens. The showroom is looking really empty right now which I suppose is good in a way, so I'd better get cracking.

So long for now.
Posted by brandon phillips at 7:36 PM 3 comments: 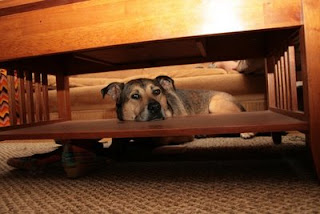 I was supposed to work in the garden today but it's raining so I think a PBS home improvement/wood working marathon is in order.

I'm mixing clay on tuesday, it'll be nice to get some clay under my fingernails again.
Posted by brandon phillips at 11:09 AM 3 comments:

The rest of the work from the show is posted, you can see it here. the address is http://deeprootsexhibit.blogspot.com

The Deep Roots show can be seen here. I still have to upload my pots and Kent Harris' pots which hopefully I'll do sometime tomorrow. I wouldn't call this the most professional method of getting the work out there, but it's all we had time for so it will have to do.

Not much of anything going on in the studio, in fact I haven't even been up there in a few days. I'm leaving for Kansas next Tuesday to help my brother do some work on his house. I'll mix up clay and get it out in the racks before I leave so I can get back to potting when I come home. I'll have the remaining lumber to finish my treadle wheel this weekend but I may not be able to get to it before I leave, I'm trying to get some odd projects around the house tackled. I spent a good portion of the afternoon crawling under the house replacing some waste lines. Our waste line that runs from the back of the house up to the main line was old 2" cast iron that was so corroded on the inside it was about 1/2" of usable line. We'd been having some problems with our washing machine backing up so it was time to get it done. I'll be working on some gardening the next couple days so that'll be nice.

So long for now!
Posted by brandon phillips at 8:21 PM 1 comment: 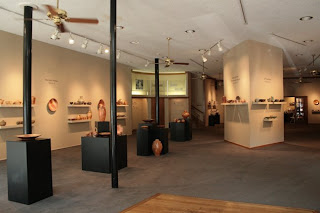 This is what it looks like when you walk through the door and look to the left. 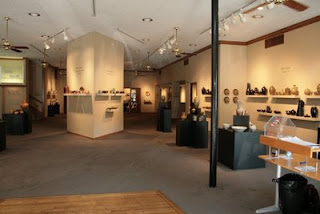 This is what it looks like when you walk through the door and look to the right. 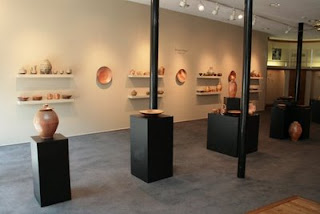 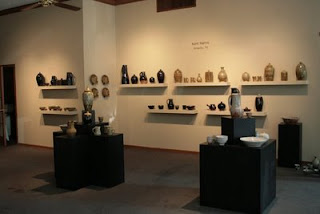 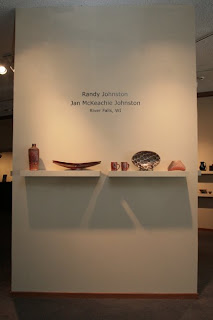 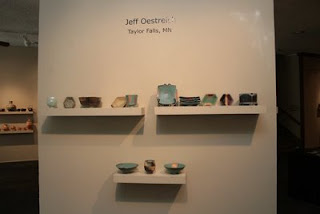 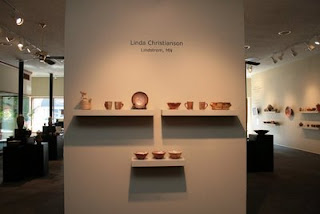 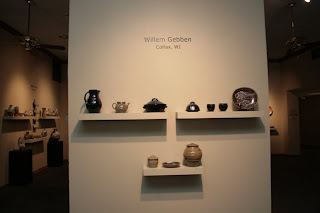 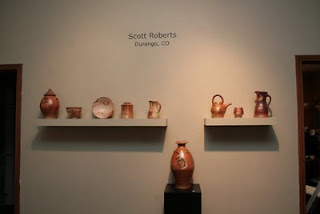 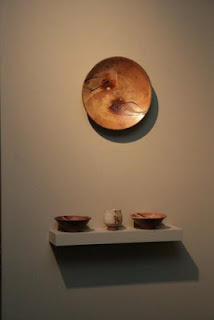 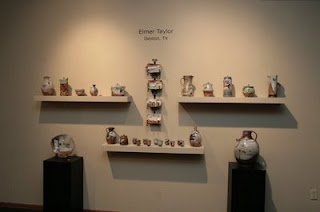 We had a good turnout for the opening, not as many as we'd hoped but we were in competition with many other events last night! The show will be up for nearly 2 months so I'm not too worried about it. Sales were much better than I had anticipated, the gallery says it is one of the most successful openings(sales-wise) that they have ever had. We sold about 50 pieces from all but 2 potters out of the 270 pieces that were there, not too shabby.

We are going to take some photos of what is available and post them online so if anyone is interested they will have an opportunity to purchase work. The gallery takes only a 10% commission so most of the work is priced right around what you would pay for it straight from their studios. A few of the potters (Scott Roberts, Willem Gebben, Linda Christianson, Kent Harris, myself) had set pots aside for this show and they are what they consider the best of the best, so this is a rare opportunity to get some of this work for fair prices. We won't have an online cart system, you'll have to call or email, first come first served. The gallery will charge for packing and shipping and they won't ship out until the end of the show(end of June.) I'll post it here as soon as we get the images up, so you'll have to check back soon! I hope to have it up Monday morning, but it may be as late as Tuesday.

Here are some shots of pieces that came out of this last firing. My wife will not allow me to post photos of the show until thursday(she's the gallery manager) but if you look closely you can get an idea of how it's laid out. 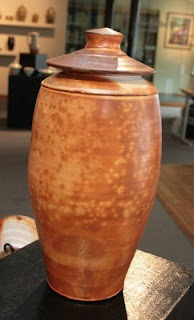 Beautiful jar. There is some brushed slip from the bottom up to where the spotting starts, it's hard to see in the photo but it adds a nice quality to the piece. 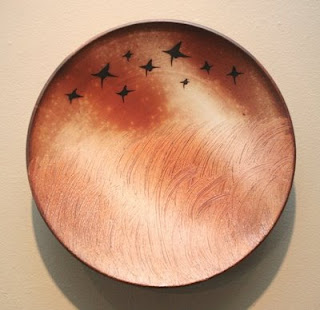 This may be one of the most fabulous platters that I've ever had come out of the kiln. 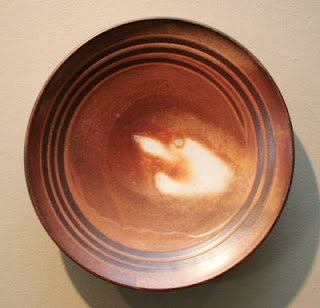 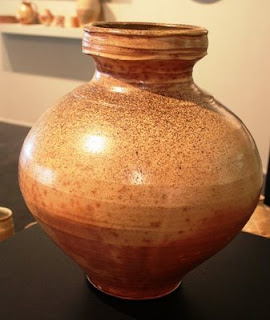 Dinner plate, there are 8 of these all with spotting. 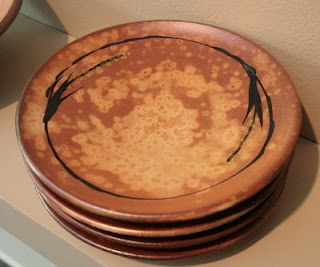 This spotting is ridiculous. 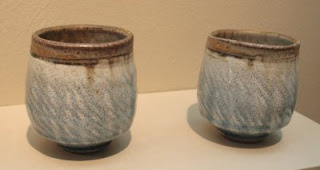 Blue ash over crackle slip, green ash on the lip. 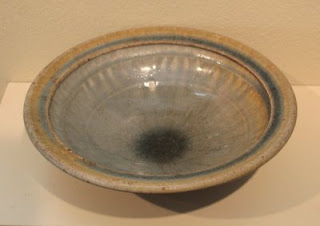 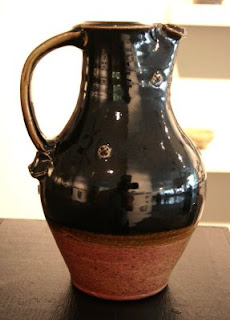 Kent Harris dropped a few pots off a couple weeks ago to be fired in my kiln. I think I worried him a little when I told him I fired in 6 hours. This tenmoku jug came out fabulous. I hope he drools a little when he sees this.
Thanks for stopping by.
Posted by brandon phillips at 1:21 PM 17 comments:

Well...where to begin? This firing is one of the best I've ever had. I'm sorry I don't have more pictures right now but my wife took off with a chunk of the pots for my show. I'll get some photos when I can but for now this teapot will have to suffice. 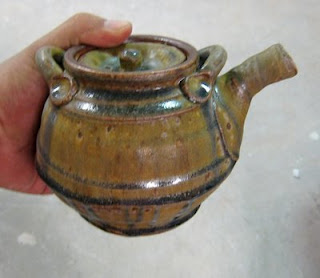 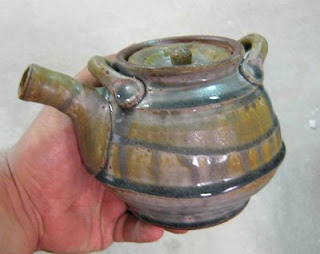 This is my blue ash glaze, it turns yellow where the ash hits it. I love it.
So, I fired in about 6 hours. When I was in college my prof. taught me to fire the cone 10 reduction kiln in about 7-8 hours. He had it down so he could start it up when he got to work and shut it off when it was time to leave. His advice was to get the reduction right, soak it when you need to, let the glazes melt and then seal it up tight and let it cool for 2 days. Some of the best fired pots I've made have come out of that kiln. The idea is that as long as you fire through the atmosphere that you want and let the glazes melt it'll be fine, the color/surface comes in the cooling. My flashing comes from the flame carrying the salt, if you woodfire and want flashing from just the flame this clearly won't work. Think about raku, fire it up to 1800 in an hour, as long as the glaze melts you're ok. I've wanted to "fast fire" for some time but have never wanted to risk it. This time I was foreced into a position where it was either fast fire or not at all. The firing was a bit of a hail mary but it paid off. There are "rules" to this though. If you single fire clearly this isn't an option. I use a very coarse clay body, lots of fireclay and grog, so it can take thermal shock. I don't think porcelain or fine grained clay bodies would do so well. So here is the firing schedule I used(everything except cone packs were bisqued):
1.5 hours: ambient to 900 degrees.
1.5 hours: 900-1200(begininning of red heat.) My friend Kent says that ash glazes need to go slow here to avoid blistering, my experience says he's right.
1.5-2 hours: 1200-cone 5.
1-1.5 hours: cone 5-cone 9 sometimes my kiln will just fly through this temp range and it's difficult to hold it back. I get good glaze melt in an hour here. I also fire neutral, which is theoretically the most efficient way to fire, reduction will slow this down.
Here is an interesting article by Marc Ward.
So long dudes.
Posted by brandon phillips at 1:01 PM 7 comments:

I just finished firing #3 in the new kiln. I guess I should probably stop calling it the "new" kiln. I woke up at 6am, had my traditional iced tea and pb&j and noticed it was drizzling and foggy outside. I had only slept about 4 hours and was still exhausted and decided to just go back to bed. I woke up at about 10 and realized that I had kiln shelves in the wood kiln borrowed from the school that I had to have back on Monday. The wife and I have dinner plans with some other folks tonight so I decided to fast-fire this load. I fired in about 6 hours, taking time to soak at the critical points. I think I over-salted it but I guess we'll find out if I'm a fool or not Monday morning. I didn't see any cracks on any pots, so maybe it's all good.

So long!
Posted by brandon phillips at 3:27 PM 8 comments: 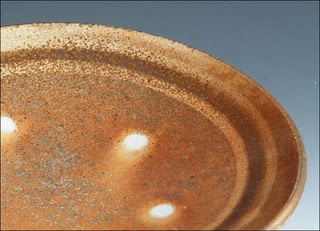 I know many other potters out there like myself hoard the best of the best from their firings for gallery shows or publications or whatever. I sent a batch of pots to Earth and Fire Gallery a couple weeks ago that I felt were some top-notch pieces. Earth and Fire has been around for a number of years but has recently closed its doors and is now exclusively online. It was always primarily an outlet for pottery and a few other handcrafts but now is exclusively pottery. So if you have been interested in my work here is an opportunity for some racers(as tony clennell would call them.) Hop on over there and support this potter and also an excellent outlet and supporter of pots.
Posted by brandon phillips at 12:00 PM No comments: