I made a few big pots as demos for my students today. I've been meaning to make some bigger pieces for awhile now so this was a good excuse. These aren't big in a Mark Hewitt sort of way but as a functional potter these are stretching the boundaries of what can actually be used. 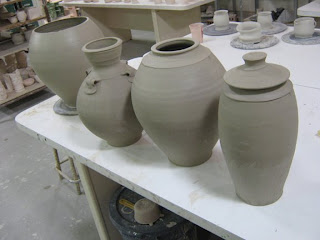 The guy on the far rightwas made in two sections and is just over 18" with lid. 2nd from right was made with a modified coil and throw method and has a lid to be trimmed tomorrow and the far left has one more coil & throw section to go-it will be lidded as well. I love big lidded jars, I just think they are so cool. 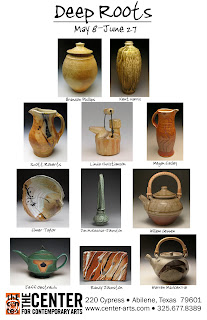 This is a poster that will be circulating at NCECA. EEEK! I'll write some more about this show later.
So long for now.
Posted by brandon phillips at 8:39 PM

So, one of the problems I have is knowing how much clay to use for a pot of size X. So how much would you have used for a 16 inch pot? And how thick are you throwing it - if you're putting on coils or making in two halves, then about a quarter of an inch (10mm or so?)

Show looks fab - wish I could make it - we'll want pictures, of course.

Ahhh, the brown pot show! Love the poster, what good company you are sharing.I would be so impressed with myself if a photo of my work were on that poster:)

Those pots look nice. And yes that's going to be a great show!!!

brandon, show will be great. good company too. your large pots look very nice. lots of surface to get some delicious tile 6 spotting on.i'll be at nceca next week and will look out for this poster. oh, and congrats on the show you just came back from. glad to hear pots are sellin'. cheers.

cool variety of shapes... congrats on both shows

andrew-it really depends on the shape you are making. my very general rule of thumb is 4" for the first pound and 1-1.5" for every pound after that for a shape with a decent curve. so 10#'s could potentially yield a jar that is 14-16" high. i throw pretty evenly, maybe just over 1/4". if the bottom walls are a little thick i'll trim a little off while it's still wet. for the both methods i shoot for about 5/16" walls, though there always seems to be thick spots for me where the coil attaches!

kyle-the posters will be at the university of north texas booth, elmer taylor will have them though I'm not sure if he's just hanging them or giving them out.

Thanks Brandon - that's a good rule of thumb to know. I have thrown jugs from 3 or 4 lbs of clay that are about 10 or 11 inches tall, but it's been hard going and I think I'm stretching the clay a bit much. But I'll have a go at throwing something a bit bigger with a bit more clay and see how I get on.

Poster looks good, I would do anything to get that sushi platter from Randy, but I think that one is a keeper. Anyways have Saybra send me some to distribute up here.

Thanks for the size/ weight info. That's very useful to know. I don't throw large often enough to have a good estimate in my head of how much clay I need.