look, i have been doing stuff.

I finally got around to making some pots today! I'm sloooooowly plugging away towards the next firing on May 1st. After these pots in the photo are finished I'll be about 1/4 of the way there. I"ll have quite a few student pieces in that firing so I won't have to fill the whole thing up myself.

The way I've been potting and firing so far this year some folks might get the impression that my pots are flying off the shelves. The truth is they're just stacking up in the showroom, that's probably part of the reason I haven't had much motivation to get in the studio these last 2 weeks. I'm pretty much taking the month of May off for some much needed vacation. Vacation for me will consist of gardening, landscaping, house repairs and a week in Kansas helping my older brother do some work on his house. Then in June I'll be teaching a summer course(how do you cram a semester's worth of ceramics into 4 weeks?!!) and get back to the potting. My current stock after the may firing should carry me through the summer so I probably won't fire again until late July-unless of course sales take off! 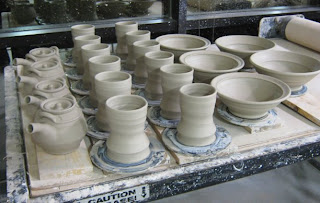 Todays work. Not much, but it's a start. 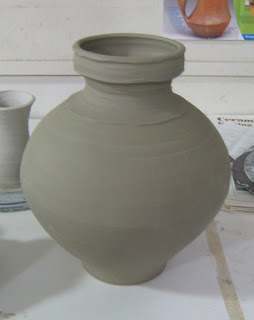 20# vase. This is a bad photo to judge scale but if I were to stick my arm inside the spot where the shoulder meets the neck is at my elbow. It's the largest one-piece pot I've thrown in a long time. 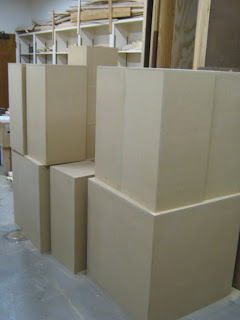 This is where a chuck of my free time has been going. I am having to build about 30 pedestals for my show in may. The gallery we're showing at has never had an all 3-d work show so they only have a handful of pedestals. There was an issue for awhile about the pedestals because I felt that I shouldn't have to pay for them, painters don't have to purchase and build the walls, right? Luckily the gallery was able to secure funding so I didn't have to pay for them but I do have to build them which isn't so bad. As soon as these are out of here I have to fabricate a fair amount of wall shelving that I will have to pay for, but that is totally reasonable because it's custom for the show. I really wanted to do floating shelves like these(watch the slideshow), but the expense and amount of labor was too much.

Anyways, no classes tomorrow so I'm looking forward to getting some work done.

Brandon -- Can you post a video on how you make and attach your spouts?

taking the month of sounds dreamy... have fun. it always surprises me that the pedestal thing can be such a deal breaker. it sounds like you all found a good compromise... i'm sure it's expensive to build 30.

chris- i can, though i don't know if i'll get to it today. maybe monday or tuesday?

Hi Brandon I've been admiring your pots and enjoying your blog for sometime now. Would you have a real toasty teapot with some black brush work on your shelves for sale ?
thanks, Colleen

Colleen-send me your email address and I'll send you photos of what I have.

You've been selected for a Kreativ Blogger Award. See the details here:
http://finemessblog.blogspot.com/

Brandon it's potterybycolleen@hotmail.com
please include the price
Thanks, Colleen

Brandon, I selected you for the Kreativ Blogger award, but now see you've already been picked! Oh well, guess that means you really have to do it now! More details at my blog link above.

Hey Brandon,
Great site, this is my first time visiting.
I'm a part time potter wanting to go full time, and exercises you can recommend for repetition of forms? All of my work is "one of a kind" sense I haven't been able to duplicate on the wheel yet.

Thanks.
Brian in Houston