i've never written too much about my kiln so i thought i would take the time to do so before its gone. i built this guy over the course of a few months last summer and had the first firing in december of 2007, and will have the last firing(#9) in a couple of days. the design is based on peg udall's kiln in jack troy's "woodfired stoneware and porcelain" book.

my intent was to coat the whole kiln with a clay/cement mixture to help seal it and protect the fiber but i knew i wanted to build a bigger one so i never coated it. i incorporated a swinging door for the chamber and the stokehole. there was some fancy steelwork to support these but my welder died in the process so the door is only held tight to keep it from falling back away from the kiln, there was nothing to keep it from going side to side. that orange strap there is what keeps it from falling to the chimney side and i extended the top tierod to keep it from falling to the firebox side but because of that it can't open any more than you see here which means that there is only about a 20" opening to load, a huge pain in the butt. it has been nice but i won't put one on the next kiln because of all the steelwork involved. there is a whole in the door there that accepts a pyrometer that i use to monitor temperature gain so i don't go too fast. this kiln will fly at the beginning if you let it. 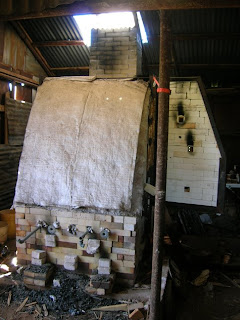 the first major mistake i made was to only have a stokehole on one side. this means that it potentially draws more air on the stoking side resulting in oxidation and a cool spot on the stoking side bottom. in this photo you can see that the opposite side of the kiln is only three feet from the wall(which seemed ok at the time?) so there was no room to add a stoking port to the other side. i've learned to rectify this with stoking and the damper but it took several firings to figure it out. mistake #2 was that i made the base of the stack into one chamber instead of the 2 that were in the plans. i thought that with such a small kiln i didn't need them. i was wrong. having two chambers below the dampers(1 for each side) can help modify if you have any unevenness in temperature, oops. 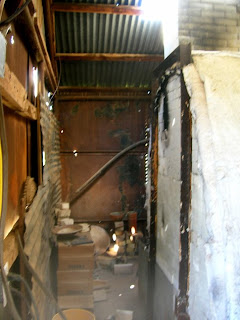 here is the bagwall after 8 firings. you can see on the left two places where the bricks are actually falling apart. the bagwall gets the most intense heat and salt of any spot in the kiln and has completely melted into one solid mass, coatings and kiln wash did absolutely nothing to help here. i hope it will make it through one more firing. the brick in the body of the kiln is holding up ok, i used hardbrick for the arch, floor, flues, and wall above the firebox. the rest of the walls are 9" of insulating firebrick which are amazingly in better shape than the hardbrick. go figure. 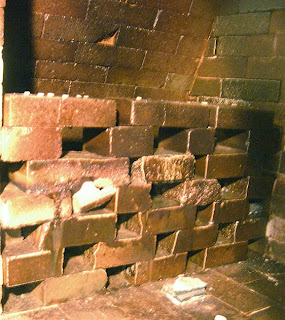 here is the floor, its kind of nasty but i've seen worse. the stack here is 2 12x24" shelves. the first few firings the bottom opposite the stoking hole fired about 2-3 cones hotter than the rest of the kiln until i learned how to control it. one time i put a cone 12 in the pack here and it was flattened melted when the rest of the kiln was between cone 10-11. so you can see the bricks in the floor there are actually melted from those early firings, kinda neat, kinda scary. 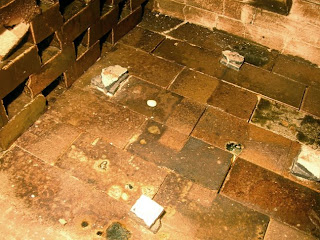 this shot is looking down into the firebox from the top of the bagwall. you can see the stokehole on the left. i've actually gotten burns similar to sunburn on my face from clearing the grates for stoking when the kiln is near peak temp. i always wear protective eyewear so my eyes stay safe. 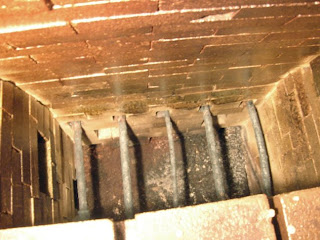 the next kiln is going to be a larger version of this one. this kiln has been a great learning tool and i have never had a bad firing as far as surface goes. the kiln has always responded well and its relatively easy to fix mistakes from stoker error. i can prepare enough wood for a firing in just a few hours and aside from my face and arms near the stokehole it could be fired in shorts and sandals.
i hope that wasn't too boring to anyone.
now i've gotta get back to loading.
Posted by brandon phillips at 7:40 PM

What type of gas kiln are you using? I'm still trying to decide what type of kiln I am going to have with the grant money I got. I'm getting so frustrated with my space constraints, I'm thinking I should maybe just buy one, but I'll have to save a bunch more money if I do that.

the gas kiln at the univ. is a sprung arch downdraft similar to the one you built with john britt but smaller. it is 2 12x24" shelves deep and stacks about 4' tall. i think it would be a good design and size for you. you can sort of see it here: http://4.bp.blogspot.com/_YKqkX5fzu5E/SKjPL_hKhqI/AAAAAAAAAlU/v4W4Vh_E1AI/s1600-h/kilnyard.jpg

when i get a chance i'll snap a couple photos of it for you. you should call up larkin refractories and ask if they have any insulating firebrick "seconds." i got some years ago for $1 each and there was really nothing wrong with them, just chipped corners and such, $40 chinese advancer kiln shleves too, heckuva deal. i've put mine through some serious hell and have never even had to flip them(50+ gnarly firings).

excellent info, thanks for sharing, that size is prob way big enough for the occasional firing i do....i'm still leaning towards soda firing though hope to build next year....

I couldn't get the link you posted for the kiln, but would love to see some pics sometime.I think my frustration is coming from the fact that the most convenient and practical location for me to put the kiln only allows me a 5.6 X13' footprint so I am really limited on the size of the kiln. I'm having to think about the size carefully. I had a friend that I thought was going to sell me her frame and brick for a Geil design she had, but she has changed her mind. John sent me plans for a smaller 10 cu ft sprung arch and that may work, it's just a lot to think about.At least I finally got the check from the grant I got, so I am itchy to get started.