well on its way.

here, i am proud to say, is the beginning of our new showroom. i poured the footings and laid the floor last week and today i put up the walls and porch beams. i've had a bunch of lumber for a year or so now and originally we were going to add another bathroom on to our house and we decided it was going to be too costly and then i was going to replace the roof to the workshop but the workshop is in such poor shape that it really needs to be torn down and rebuilt, so we decided against that as well. i don't have tons of customers locally but i'm starting to have enough that its too much trouble to unpack and repack all the pots everytime someone stops by.

this is going to be pretty small, 10x14 inside with a 4 foot porch bumping out on the front. certainly large enough for my work though. we are penny pinching big time with this guy but i think it will turn out pretty nice. all of the larger lumber was in decent shape but half the 2x4 studs i had were all twisted and warped so i had to buy some new ones, other than that the plywood flooring and concrete are the only investments we've had to make so far. we picked up some nice windows from some folks we know that just replaced theirs and we scored a nice door from my wife's work. i have two stacks of different types of siding, one will go around the sides and back and the nicer stuff will go in the front.

i'm building this without a permit for a couple reasons. i am just over the square footage for needing a permit for a shed so i think i can play dumb if there's a problem. we also have some weird setback laws here that include driveways. thats right, you can't have a structure within 12 feet of a driveway except at its termination, weird right? same setback for the property line, so according to the city rules i couldn't have any structure on this little strip of land thats deeper than 5 feet. i'm building the whole thing to code though anyways(except for my floor joists which are 6" too low but come on its almost 2 feet off the ground already), its how i learned as a carpenter so its in my nature to do things right. in fact for a shed i'm overbuilding it, so i'll just try and fly under the radar and hopefully there'll be no problems. enough blither for now, i won't be making any pots for a week or two so i'll keep you up to date on the showroom. 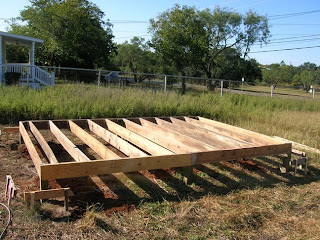 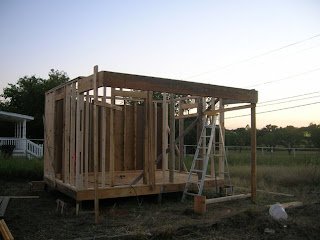 Posted by brandon phillips at 7:31 PM

Good luck and you will enjoy having a place to show your work.
Our gallery area is 12x16 and has served us well for 24 years. I would like to build a deck off the front to make it more hndicap friendly-but other then that- it has been a good place for us.

Permit seems to me too close to permission. I thought I didn't need permission anymore when I lived on my own, away from my parents. Well, there's the wife of course. But that's not permission; that's sharing.

Looking good Brandon. It will be nice to have that space. We try to fly under the radar most of the time too.

Your neighbors live in shipping containers! Surely they won't give you crap about a well built structure.

Huge fan of playing dumb. I have mastered the "I was going how fast?" Bambi-look. I have a couple of questions though. Do you plan to insulate and heat? Do you need to where you are? What about power for lighting. That might make the shed concept difficult to accept if it is powered.

Hey have you seen the barn/painting studio that Joe B. is building? Whew, it's nice.

i'm not going to insulate it or run any heat or ac. i am going to wire it though, but it'll be the last thing before sheetrock goes up. i figure i'll be "in the clear" before then. we only plan on being open 10-5 on saturdays, maybe sundays. so we've placed it to get some good sun and natural light to keep it warm in the cool weather. in the summer we'll just open the windows and run a fan if need be.

ron, yeah i keep up with his blog, man that place is nice!!!

The showroom looks like it will be really cool! I wish I could just say, 'hey, I'm going to put up a building today.' So cool to have the carpentry background!