the next place we visited was guillermo cuellar's. he and his wife built this place in shafer, mn. the first time i ever saw his work was many years ago in warren mackenzie's showroom. i thought his pots were good then, but they looked too much like warren's. he's come quite a ways since then. i really like his pots a lot now, we had a hard time restraining ourselves here. 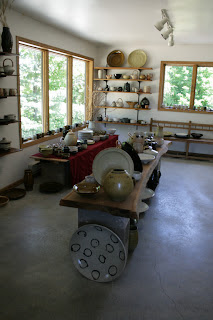 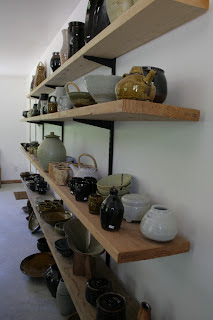 this was my favorite vase.
after guillermo's we went to see linda christianson. she was the first potter we went to see that was actually home! i suppose i should mention real quick that all of these potters had self-service showrooms so you could still get pots when they weren't home. linda was digging out a foundation for a wood shed next to her kiln and came over to greet us. i'll tell ya, ron's said it before and i'll confirm, linda is pretty much the sweetest person ever. she was soooo nice, and we stood around talking with her for well over 2 hours. my wife and linda really hit it off and we left with linda saying that she wished we were her neighbors, that might be one of the nicest compliments i've ever received. we didn't take many pictures here because we were chatting for so long, but if you ever go to minnesota go see her, she's awesome. ron, linda says hello. 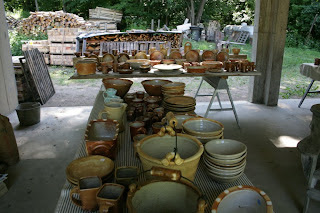 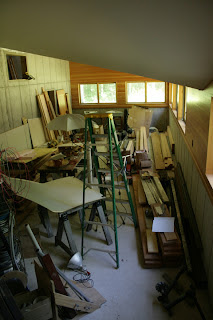 this is linda's new studio in progress. her and her husband have done all the work, pretty amazing.

jeff oestreich lives about 5 minutes from lindas so we went there last. his showroom was pretty empty because he got wiped out during the studio tour. he admitted to us that he really hadn't done any work since then. he gave us a tour of his pottery and then invited us in for coffee and cake. i had never met jeff before but he brought us in and treated us like old friends that stopped by for a visit. he has a beautiful house and an amzing pottery collection, i kept getting distracted by all the old pots. we chatted with him for a couple hours and then were on our way to duluth. 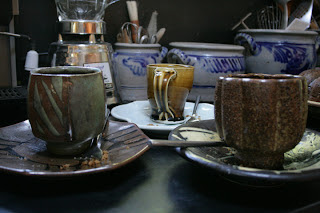 i have a couple more stories to share but i'll have to get to it later. there is lots of kiln stuff to tend to.
Posted by brandon phillips at 7:47 AM

It's so great to see all this. What a great trip.

looks like quite a trip. i've always liked the unwritten rule of making sure fellow potters get coffee or tea and fed if there is any food around.