i'm sorry i haven't been posting much but there really hasn't been anything going on here pottery related. i've been out of clay for a couple weeks now and i am heading to austin tomorrow to pick some more up. we are heading out for our honeymoon on july 13th so that clay won't get mixed until i come back. so there probably won't be much going on until the end of july. it sucks to be out of the studio so long, i've kept busy with other things that have needed to be done, like writing my syllabi for my classes in the fall. i have also been sucked into playing the legend of zelda on the original nes. i'm a little ashamed to say it but this has consumed a chunk of my time this last week. we have had 100+ degree weather or rain almost everyday so i have done nothing to my studio.

in some sad news we are looking for a new home for my long time friend lucy. lucy is a german shepard/pit/heeler mix that i've had since 2004. she has been a good dog for these last four years but she is very territorial in regards to other dogs. its not really fair to my wife to ask her to get rid of her basset hound when my dog is the problem. she has viciously attacked both kaylee and niles(bassett hound) on more than one occasion. she pounced on kaylee yesterday unprovoked right in front of me and i had to pry lucy's jaw off of kaylees throat with my hands, getting bit three times. i'm giving her the benefit of the doubt on biting me because come on, its never smart to stick your hands in a dogs mouth in the middle of a dogfight, but it was either my hands or kaylee. so this was the final straw for saybra and i am begrudgingly coming to terms with the fact that she needs to go. i refuse to have her put down because i know that i will never forgive myself, i'll take her to a no-kill shelter as a last resort. its hard because she has always been with me, in my old studio she would always lay next to my wheel while i worked, she would sit with me while i tended the kiln, she would sit on the couch and watch television with me and she always slept at the end of my bed. this boy is going to miss his dog greatly. 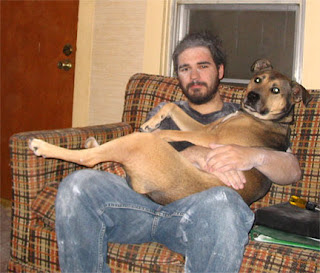 Well hopefully she'll go to a good home where she can be Queen Lucy.

Sent pots your way yesterday. Should arrive via UPS on the 7th. Let me know if they make it unharmed.

But seriously, I gave my beloved cat away after I was married because of allergies, etc.

Sounds like it's too HOT to make pots. A break may be a good thing.

I'm heading back in with my tool belt to work on that punch list.
cheers.

It's tough to say goodbye to a good friend. Hang in there, when you find her a good home it will ease the pain a bit.

Brandon: I LOVE Zelda!!! When Wesley was in third grade we used to play all the time. One day I took her to school came home and tried to beat that big spider thing. I didn't eat breakfast or lunch, forgot to pick her up at school and then called for take out pizza for dinner. I had to give it a break after that I was so obsessed! This is making me want to start playing again.
Also had a heeler mix that got aggressive with Wes and I had to take her to a no kill shelter. I have her son still and he is extremely gentle. I'll try and post a photo of him. He is an Australian Shepard/blue heeler mix. Sorry for your dog, it was hard going to the shelter with mine.

That's a sad one, sorry mate

My sweety died right after Hurricane Katrina. He was 15 years old. I don't think I could go through that again.

Maybe you'll be able to visit...